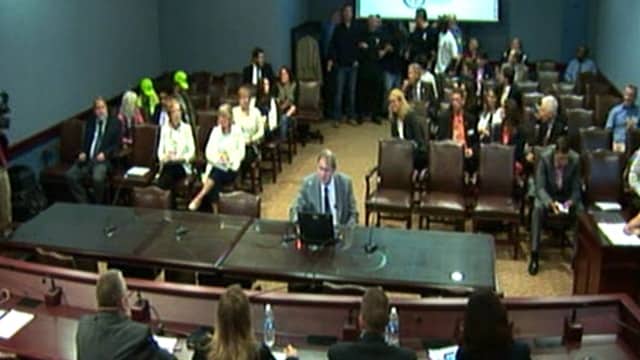 Government protesters crashed an informational hearing on gun-free zones at the Pennsylvania Capitol building this week, riling state legislators and setting the stage for a heated debate about concealed carry.

Demonstrators interrupted testimony from pro-gun researcher and economist Dr. John Lott during Monday’s hearing to shout down the House State Government Committee for its failure to act on an unrelated piece of legislation banning gifts between lawmakers.

About half a dozen people filed into the back of the room chanting “pass the gift ban, do your job” before police arrested them in the hallway outside, preventing some committee members from entering the hearing, including Republican Rep. Francis Ryan.

“I am absolutely offended at that theatric show that was put out in the hallway when people prevented me from getting to my appointed place and duty at the appropriate point in time, when I was supposed to be here by noon for a presentation called by our chair,” he said. “That was done for entirely theatric purposes.”

Ryan, who served four decades in the Marines before retiring in 2011, rebuked the protesters’ “act of civil disobedience” from infringing on his freedoms before praising Lott for his work.

“Well, I spent 41 years of my life defending other people’s freedom and I’ll be damned if anybody’s going to take mine,” Ryan said. “Your comments, your book, thank God for what you’ve done. I agree with you 1,000 percent.”

Lott founded the Crime Prevention Research Center and is a favorite among gun rights groups for his research linking lower crime rates to concealed carry laws. Gun control advocates and others pan his expertise and remain critical of his research methodology.

“If the individuals who just engaged in civil disobedience were armed, would we be safer?” he asked. “Let’s not just talk empirical data. Let’s compare it to real life.”

Lott pushed back, saying the numbers tell the story of “real life” and can answer Bradford’s question entirely.

Lott cited a request from several airline pilot unions in the wake of the 9/11 terrorist attacks who wanted him to advocate for allowing pilots to carry guns on commercial flights.

In his research, Lott discovered commercial airlines mandated pilots carry guns from 1924 until 1963. The practice was optional until 1979, he said.

“You literally have hundreds of millions of flights you could look at there and not one example of a problem that occurred,” he said. “Yet when you go around talking to senators … they get into discussions about what happens if two pilots get into a fight and shoot each other or some situation like that.”

“Is it possible something like that could happen? Sure it’s possible,” he added. “But the question is we have hundreds of millions of flights we can look at it. Is there one case where there’s even something remotely similar? You have to look at the facts of cases in order to get an idea of how much weight we should put on these types of things rather than saying something might possibly happen.”

CeaseFirePA Executive Director Shira Goodman criticized the hearing for excluding supporters of gun-free zones in an interview with Fox 43 News.

“He was presented here alone, given a platform to testify as an expert. There were very few questions permitted. I think that’s very dangerous,” she said. “This is our state government committee that’s supposed to be doing an informational hearing, and I don’t think they’re getting good information.”

“People who clearly are allowed to get guns can get them. They’re allowed to carry in this state openly except in Philadelphia, where you need a license to carry at all. … We need to talk about ways to keep people safe,” she added.

The hour-long hearing came after Lott headlined the Make the Second Amendment Great Again rally in the Capitol building’s rotunda. During his nine-minute speech, Lott praised law enforcement, challenged gun-free zones and complained about the failures of the Pennsylvania Instant Criminal Check System.

“We know if we let police do traditional policing, lives could be saved, crimes could be deterred by having … police spending their time and effort using resources to have them do what we know works,” he said.