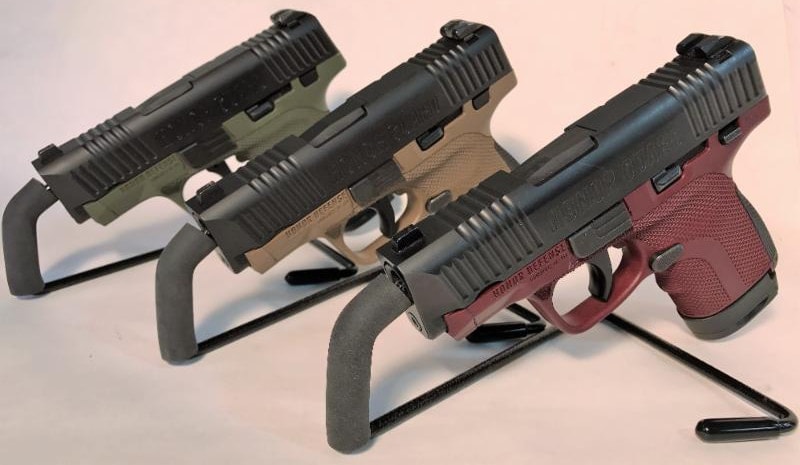 The new models include new colors such as OD green, FDE and mahogany. (Photo: Honor Defense)

The new additions bring the Honor Guard series up to 16 total models available from the company who began less than two years ago.

New to the series is the compact HG9CLE designed for law enforcement officers. The HG9CLE boasts a 3.8-inch barrel and is offered with the always tacticool grip colors in black and flack dark earth. The LE model can be purchased with or without a manual safety. Both models ship with two eight-round magazines for back-up and off-duty carry.

Honor Defense has tirelessly worked to get the Honor Guard approved for back-up use and has successfully secured its place on the back-up list of several police departments nationwide.

For civilians, the sub-compact and compact models now boast new colors straight from the factory. The new digs include flat dark earth, OD green and Mahogany. All are available with or without the manual thumb safety.

“Shooters like variety,” said Gary Ramey, Honor Defense President. “So we are trying to provide handguns with features they desire, such as compact and long-slide versions, as well as manual safeties and even colors that make their guns stand out.”

Ramey said in a press release that the innovations will continue as the company intends to offer more options to consumers in the future.

“We have grown to have a family of 16 pistol skus since January 2016. With advanced design engineering, we will continue to build on that success,” Ramey said. “We will remain focused on designs that are ambidextrous, modular, and do not need tools or trigger pull for disassembly. We’ll also be adding more grip sizes, calibers and barrel options in the future.”