On the edge of anarchy, Venezuela has 5,000 shoulder-mounted missiles 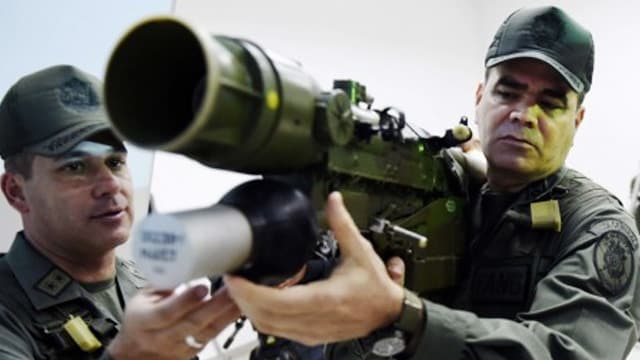 Venezuela, a country increasingly on the precipice of anarchy, has a cache of 5,000 Russian-made surface to air missiles — a fact that has U.S. officials concerned.

The South American country acquired most of the stockpile of SA-24 Man-Portable Air-Defense System (MANPADS) missiles during the reign of late President Hugo Chavez, according to documents reviewed by Reuters.

The missiles are fired from shoulder-mounted launchers by one person, and can be used to shoot down commercial and military aircraft. More than 40 civilian aircraft have been hit by MANPADS since the 1970’s, according to the Small Arms Survey, leading to at least 28 crashes and 800 deaths.

The weapons are popular with insurgent groups because of their portability, effectiveness, and ease of operation. More than 84 non-state groups are believed to have the missiles, or similar light-weight systems.

Experts fear continued unrest throughout the country could lead to Venezuela’s hefty stockpile ending up in the wrong hands.

“This risk is incredibly real and serious … to South America and Central America in addition to just in Venezuela,” said CIA Director Mike Pompeo at a Senate hearing earlier this month. “The situation in Venezuela continues to deteriorate. (Venezuelan President Nicolas) Maduro gets more desperate by the hour.”

In the midst of an economic collapse, protests in Venezuela started when Maduro’s government postponed last year’s scheduled elections. Demonstrations ramped up when the Supreme Court decided to take power from Parliament, a decision that was quickly reversed. In the last seven weeks, as protests have raged on a near daily basis, at least 55 people have been killed, 1,000 have been injured, and hundreds of businesses have been looted or burned.

All of this in a country with a thriving black market gun trade. Handguns, rifles, and grenades are readily available. According to a 2009 report from the Small Arms Survey, the number of guns in civilian hands were estimated to be between 800,000 and 1.2 million — in a country of about 31 million. An estimated 40 percent of those weapons are illegal.

The U.S. government estimates that more than a million MANPADS have been made since the 1960’s, with more than 500,000 to 750,000 still in circulation globally.