In the wake of a bombing that claimed the lives of 22 people, British Prime Minister Teresa May has activated Operation Temperer, deploying armed troops in the largest show of force since World War II.

In a press conference following the terror bombing of an Ariana Grande concert in Manchester, May disclosed that it is the assessment of the nation’s Joint Terrorism Analysis Centre that the potential for further attacks is not only “highly likely, but that a further attack may be imminent.”

At the request of police to the Secretary of State for Defence to deploy armed military personnel in support of increased numbers of armed law enforcement, May announced on Tuesday the long-standing Temperer plan has been put into effect for the first time.

“This means that armed police officers responsible for duties such as guarding key sites will be replaced by members of the armed forces, which will allow the police to significantly increase the number of armed officers on patrol in key locations,” May said. “You might also see military personnel deployed at certain events, such as concerts and sports matches, helping the police to keep the public safe. In all circumstances, members of the armed forces who are deployed in this way will be under the command of police officers.”

MI5 has raised the current threat level for international terrorism in the UK to “critical,” the highest of their five levels, denoting “an attack is expected imminently.”

On Wednesday, the first 984 troops, with SA80 rifles at the ready, began to arrive at what the London Metropolitan Police described as “static positions” around Westminster Palace, Buckingham Palace, and Downing Street, among others, noting that a further 3,800 military personnel “can be mobilised to support police within 12 to 96 hours of a terrorism incident occurring in the UK, under the well-rehearsed contingency plan.” 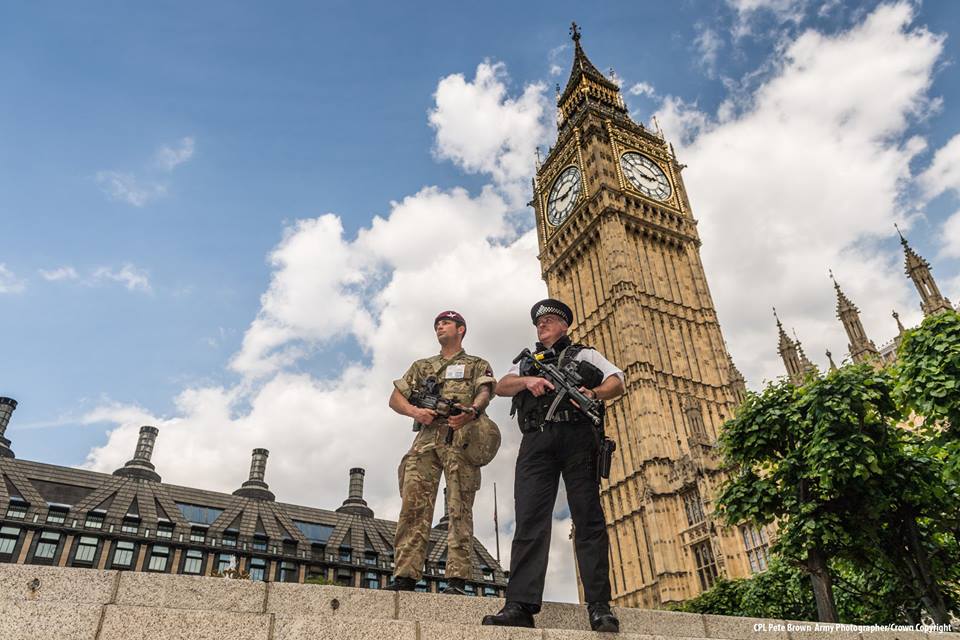 Troops deployed in support of Police on operation Temperer at the Palace of Westminster with “Big Ben” in the background. Note the SA80 A2 (L85A2) 5.56mm rifle fitted with the ELCAN SpecterOS 4x and Close Quarter Battlesight (CQB) (Photo: MoD)

Images released by wire services and the Ministry of Defence show soldiers with tactical recognition flashes of the several London-area units such as the Royal Regiment of Artillery, Household Cavalry Regiment, and the Irish Guards, wearing their camouflage service uniforms rather than their colorful ceremonial dress uniforms more familiar to tourists.

Other shots show what appear to be soldiers of the Parachute battalions. 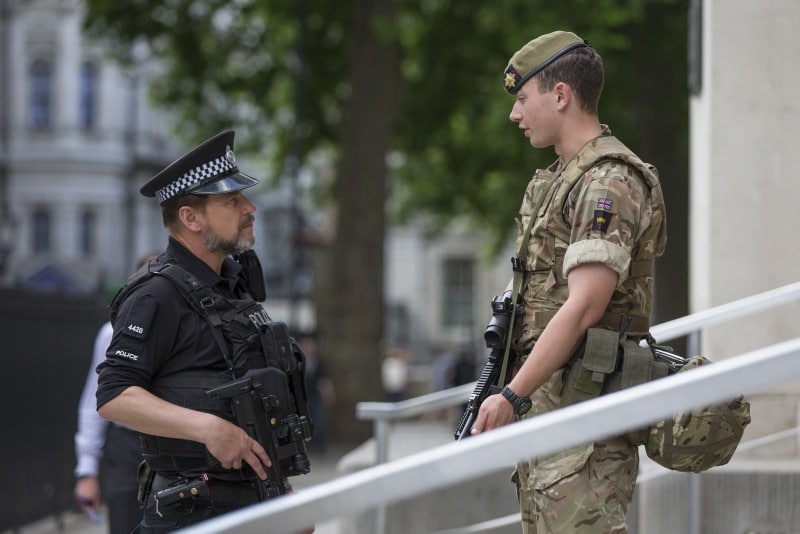 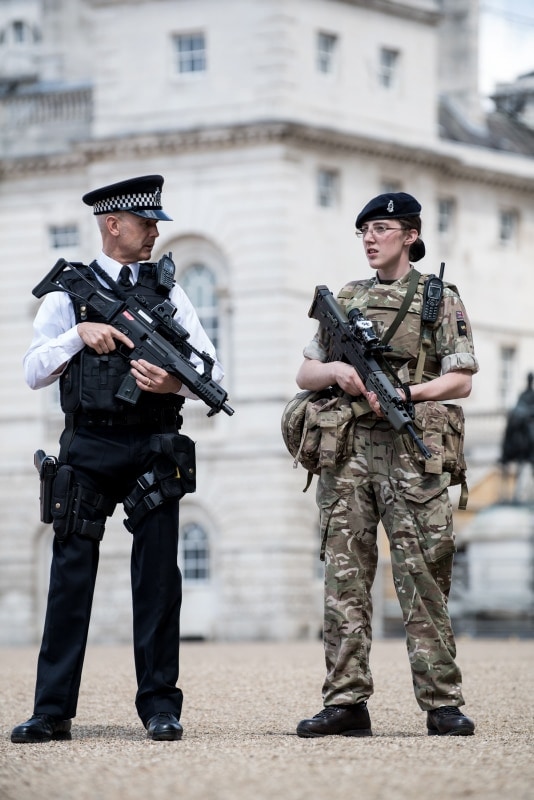 A soldier from Kings Troop, Royal Horse Artillery, patrols the rear gate of Downing Street and Horse Guards Parade next to a Met Police officer with an HK G36 rifle (Photo: MoD) 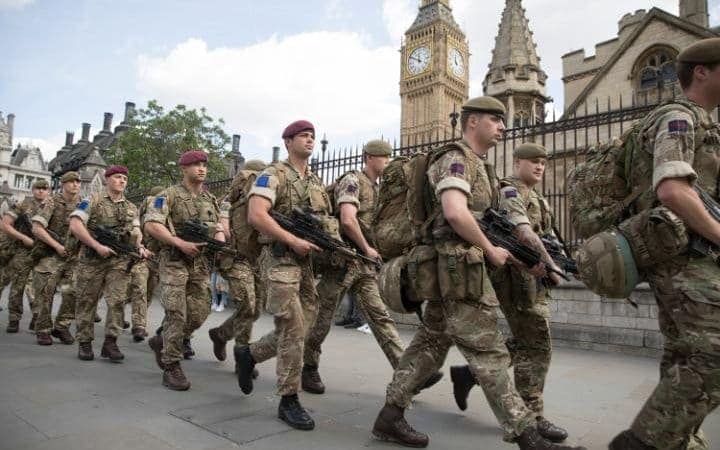 Metropolitan Police Commissioner Cressida Dick, touring the troops in place Wednesday afternoon, said, “I think the vast majority of the public will be utterly reassured to know we have the ability to call upon and have called upon, our military colleagues in this way – and to know we have more armed officers out on the streets.”

As reported by Reuters, the popular Changing of the Guard parade at Buckingham Palace has been temporarily canceled and the Bank of England Museum was closed.

The Daily Telegraph noted the last large deployment of British troops on their home territory was when then-Prime Minister Tony Blair detailed 450 soldiers to Heathrow Airport as part of a terror threat in 2003 and, barring the long-running “Troubles” in Northern Ireland, Temperer is the largest show of force in the Isles since World War II.

Meanwhile, the U.S. Embassy in London has issued a special security alert to Americans traveling in the UK. 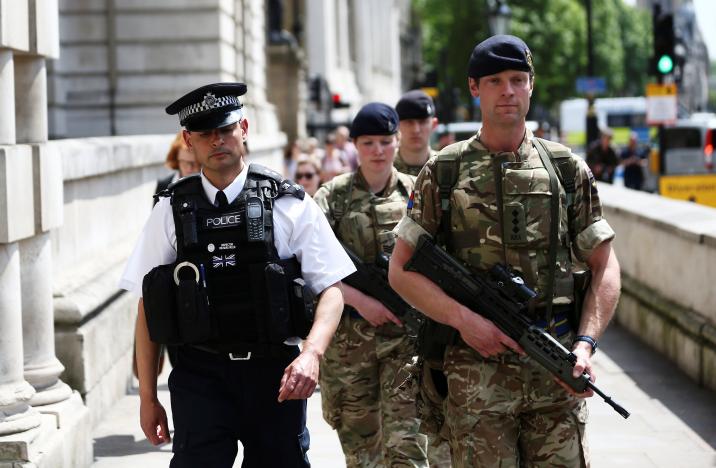 Soldiers walk with a police officer on Whitehall in London, Britain May 24, 2017. (Photo: Neil Hall/Reuters)