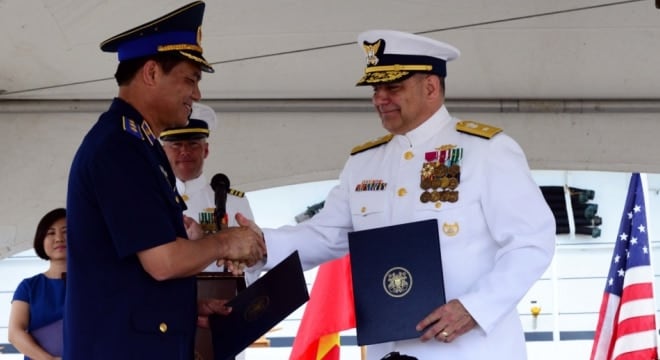 Lt. Gen. Nguyen Quang Dam, commandant, Vietnam coast guard, and Coast Guard Rear Adm. Michael J. Haycock shakes hands during a transfer ceremony at Coast Guard Base Honolulu, May 25, 2017. The cutter, now CSB-8020, will continue to serve the maritime community on the opposite side of the Pacific under a new flag. (Photo: U.S. Coast Guard)

A recently decommissioned Coast Guard Cutter who fired her guns in anger during the Vietnam war 46 years ago, was handed over this week to her new owners.

USCGC Morgenthau (WHEC-722), a 378-foot high endurance cutter, was commissioned in 1969 and, after nearly a half-century of service, including action in the Vietnam War, numerous major drug interdictions, law enforcement cases, and a variety of noteworthy rescues was taken out of U.S. service at Honolulu in April. Now, renamed CSB 8020, she was commissioned into the Coast Guard of Vietnam where she will continue her traditional mission under a red flag.

“This cutter provides a concrete and significant symbol of the U.S-Vietnam Comprehensive Partnership,” said U.S. Coast Guard Rear Adm. Michael J. Haycock, assistant commandant for acquisition and chief acquisition officer, in a statement. “The Coast Guard is honored to see this vessel continue to preserve global peace and prosperity as a part of the Vietnam coast guard.” 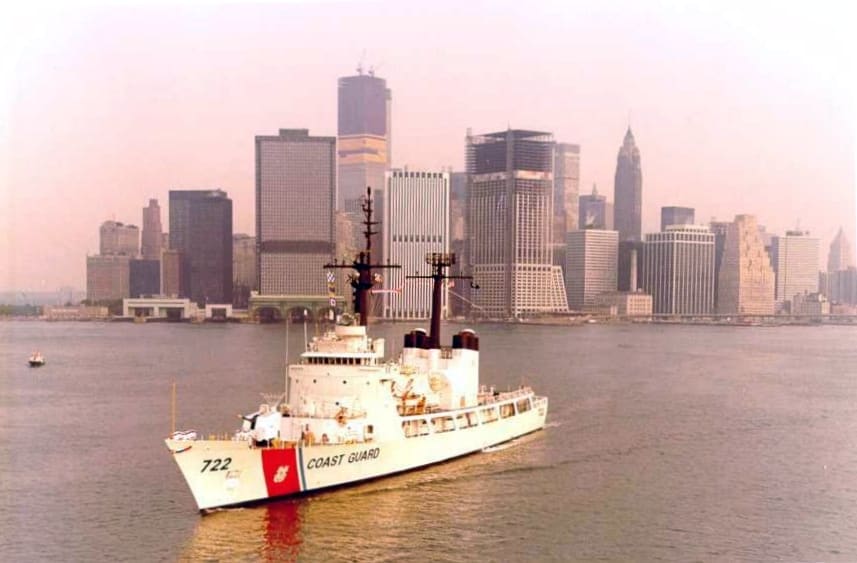 Morgenthau off Governors Island in New York Harbor when new, circa 1970. Note the 5″/38 DP gun forward and then-new WTC in the background. (Photo: U.S. Coast Guard)

As part of Operation Market Time, Morgenthau was very active in the Vietnam War, conducting support for coastal patrol craft, naval gunfire support, and patrol duties off the coast of Vietnam in 1970-71. During her period in Market Time, she delivered 19 naval gunfire support missions on targets ashore, inspected 627 junks and sampans, and cruised 39,029 miles on patrol. In total, she fired 1,645 rounds from her main 5-inch gun, destroying 32 structures and 12 bunkers ashore.

Her crew also sank an armed North Vietnamese SL-8 trawler in a night surface action while it was trying to infiltrate the South Vietnam coastline. 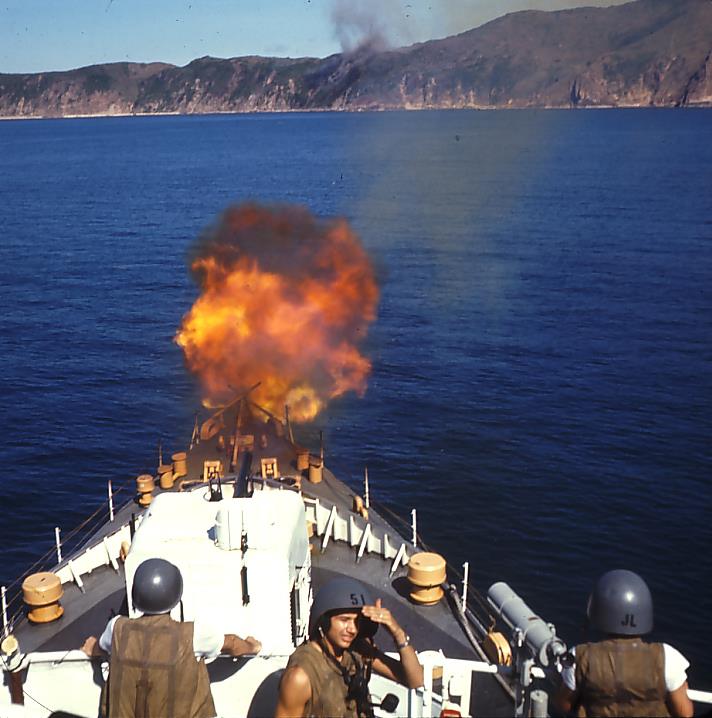 Morgenthau later made Coast Guard history by being one of the first ships to have gender-integrated crews and captured a number of drug runners on the high seas.

The cutter was transferred in conjunction with an additional six smaller 45-foot patrol boats this week as tensions in the South China Sea between China and her neighbors escalate and Vietnam is now counted as a key U.S. ally in the region.

This is not the first time the U.S. has helped rebuild the navies of former enemies. Among the first ships of the new Japanese and German fleets in the 1950s in the aftermath of World War II were loaned former U.S. Navy vessels.