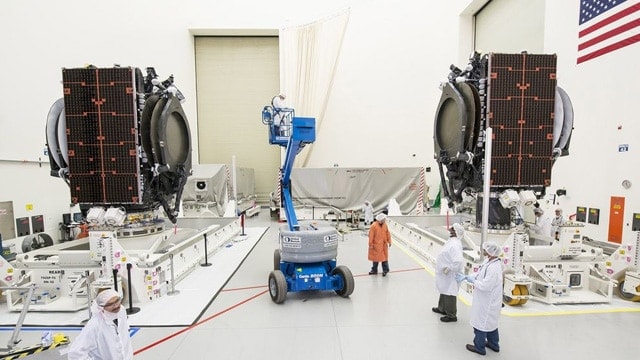 A military and commercial satellite engineer pleaded guilty Monday to federal charges of economic espionage and violating the Arms Export Control Act for selling information to a person he thought to be a Russian spy.

Gregory Allen Justice, 49, faces up to 35 years in prison for the two felony offenses, the U.S. Attorney’s Office said.

In a criminal complaint, a special agent with the FBI wouldn’t name Justice’s employer, instead calling it “Cleared Contractor A.” But the engineer’s father told the Los Angeles Times his son worked at Boeing Satellite Systems in El Segundo, California.

According to court documents, the company began monitoring Justice’s work computer in late 2015, and found he’d put files with detailed mechanical drawings and design information on to a USB drive. A few months later, in a court-authorized search, the FBI found a handwritten note with contact information for two Russian Embassy offices in Washington, D.C. One of them was the Office of the Defense, Military, Air and Naval Attachés.

On Feb. 10, 2016, Justice made a phone call in his car, which the FBI had been monitoring with listening devices. “Last autumn I sent a technical schematic and I called to follow up on that and spoke with the Naval Attaché for a moment and I was just calling to follow up to see if he was still interested in, in uh, maintaining contact and uh obtaining more of the uh, similar things to what I sent,” Justice said during the call.

A week later, he met with an undercover FBI agent, whom he believed to be a Russian spy. It was the first of six meetings the two held over several months. And Justice held nothing back.

“Since the 1980’s the United States Air Force has been building and launching surveillance satellites called WGS,” he told the phony spy. “We build those. So what I’m offering is basically everything on our servers, on our computers. The plans, the test procedures, that’s what I have access to.”

In that initial meeting, Justice told the agent he was a fan of Jason Bourne and James Bond. “I know it’s not like real life, but I like spy movies,” he said.

His knowledge of spy activities wasn’t limited to the silver screen. During their investigation, authorities discovered that Justice spent more than $4,300 from 2013 to 2015 to enroll in online courses, with payments going towards “Spy Escape and Evasion,” “Delta Defense LLC,” “Legally Concealed,” “Fight Fast,” and “Survival Publications.”

“You understand the security risk here,” the undercover agent asked Justice during the first meeting.

“(R)ight now my main concern is trying to cover existing medical bills,” he told the agent, talking about his wife, whom he said was disabled. “I’m so underwater with, with everything right now that I don’t even know how far.”

When FBI Special Agent Robert Lee looked a little deeper into some images on Justice’s work computer, it became clear that the engineer’s financial woes weren’t just a result of medical bills. There were nine pictures of a woman on Justice’s computer, all of them using the name “Chay” in the .jpg title. Lee reverse image searched those photos and found they were of a European model.

But during the investigation, the agent found reason to believe Justice was being catfished, when Facebook photos he found of Chay didn’t match up with the photos on Justice’s work computer.

“I believe that the person who Justice knows as “Chay” is not the person (the model) depicted in the photographs that he refers to as “Chay,” but rather is a different woman who lives with her boyfriend and son and who requests continual cash payments and gifts from Justice,” Lee said in the criminal complaint.

The agent found that Justice had sent more than $21,000 in cash via FedEx to the woman he believed to be Chay. He also placed orders and paid for nearly $6,000 worth of items on Amazon.com, and had them sent to her home in Long Beach.

During the six meetings with the undercover agent, Justice handed over four trade secrets and other information on USB drives for $2,500, at least $1,700 of which he sent to Chay. During the final meeting on July 7, 2016, Justice offered to give the undercover agent a tour of the production facilities, noting that he’d “found out by accident” that he had “unrestricted badge access to a DoD system test control room.”

“(Justice) stated that no photography was allowed, but that if the (undercover agent) brought glasses that could take pictures, he could circumvent that rule,” says the engineer’s plea agreement.

Justice was arrested a couple weeks after his final meeting with the phony Russian spy. He’s been in custody ever since. A sentencing hearing is scheduled for Sept. 18.