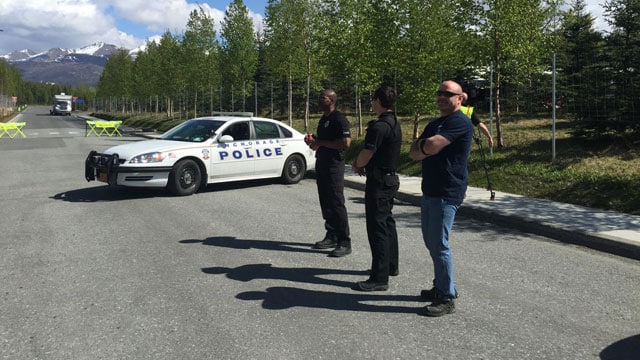 Police kept the surrounding roads blocked off as they disposed of the device. (Photo: Alaska Dispatch)

A man walked into the Anchorage Police Department Tuesday afternoon and told the officers inside that he had a bomb in his car, although authorities say it wasn’t a threat, but rather a call for help.

“He simply brought it here because he thought it was the best place to have it disposed of,” said Renee Oistad, spokeswoman for the Anchorage Police Department.

Oistad said the unidentified man showed up at the station after he was contacted by a friend who had a homemade bomb that he wanted safely detonated. The man drove his car – with the bomb – to a street near the police department and parked before he walked the rest of the way to the station.

“He did it as safely as he thought he could and walked in and let us know what’s going on,” Oistad said.

It wasn’t clear what the device was made of or whether it was a functioning explosive. Nonetheless, police blocked off the surrounding roads as a precautionary measure and called in the bomb squad.

Authorities didn’t disclose whether the device was viable, but did give the all clear by 4 p.m.

Oistad said they’re there to help, but recommend anyone with potentially dangerous items call the police for help first rather than transporting the items themselves.