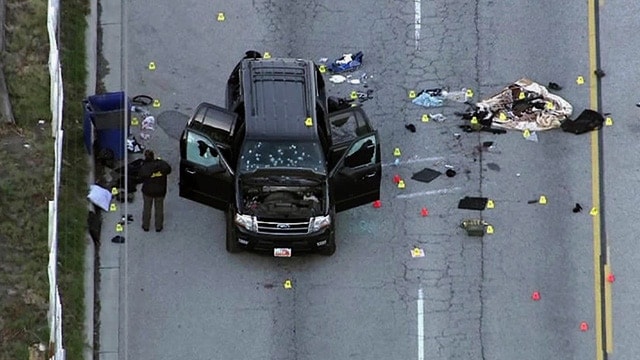 Investigators search the suspects’ rented SUV after a gun battle with police in San Bernardino in December 2015. (Photo: KTLA)

A new report details the gun battle between police and the couple who killed 14 people and injured 22 more at an office party in San Bernardino in December 2015.

The 55-page report, released by the San Bernardino County District Attorney’s Office on Thursday, details first-person accounts from the nearly two dozen law enforcement officials who responded to the scene.

According to the report, San Bernardino police arrived at the Inland Regional Center around 10:58 am on Dec. 2, 2015, after receiving multiple calls about a shooting. The caller described “two or possibly three subjects in all black clothing and masks armed with assault rifles.” Within minutes, several officers entered the conference room of the building.

“The room was still filled with smoke and the stench of gunpowder,” the report says, adding the fire alarm system had been activated and the sprinklers were spraying water. One officer described as many as 20 victims in the conference room, some on the floor and others slumped over in chairs.

Survivors described one of the shooters as having the same stature and body shape as their coworker, Syed Rizwan Farook, who had been at the event but left. The shooters fled the scene in an SUV and investigators learned Farook had rented a black SUV.

When officers in their own cruisers tracked down the vehicle, they tried to pull it over, but the driver wouldn’t stop. Sgt. Andy Capps said he could see the suspects inside the vehicle and it appeared they were wearing ballistic vests. He said he saw them passing something between the two of them. As he followed the SUV eastbound, he heard gunfire and then saw the SUV’s rear window shatter.

Eventually, the SUV stopped. San Bernardino Police Officer Ryan Schuelke returned fire with an AR-15. Farook got out of the vehicle and began shooting at officers. Schuelke got out of his car and fired three or four rounds at Farook.

“If Officer Schuelke did not fire his weapon, Farook could have killed the deputy or injured other officers and civilians,” the report says. “Officer Schuelke noticed muzzle flashes coming from the SUV while he was shooting at Farook. Officer Schuelke heard bullet strikes in his general area.”

Farook’s wife, Tashfeen Malik, was still in the SUV, and Schuelke saw her “head ‘pop up’ occasionally,” according to the report. “Officer Schuelke fired at the back of the SUV, below the window seal and above the bumper area where he believed Malik was.”

He estimated that he fired about 15 rounds into the back of the SUV. He moved positions and met up with his father, Sgt. Gary Schuelke. The elder Schuelke took the rifle from his son and began firing at Farook.

“Sgt. Schuelke estimated that he took between five and six shots at Farook’s center mass,” the report says. “One of the rounds passed through Farook causing a mist of blood on impact. Farook fell to the ground but was still moving.”

Sgt. Schuelke fired two more times at Farook. He noticed that someone was still firing from within the SUV. His son had again changed positions and was firing at Malik with his handgun.

Eventually, the officers were told to cease fire so an armored vehicle could approach the SUV. In the end, both suspects were killed in the shootout. Bomb technicians examined their bodies for explosives, and removed tactical gear and weapons and placed them nearby.

Farook had a “thigh holster containing a Springfield 9mm semi-automatic pistol with a loaded magazine,” the report says. “He had a Smith & Wesson M&P MP-15 semi-automatic rifle slung around his body. The rifle had been modified to fire fully automatic, which it could not do because the modification was done incorrectly.”

Malik had an AR-15 with an empty magazine wrapped around her body. The pair had an arsenal of weapons with hundreds of rounds of ammo.

During the shootout, the suspects fired 80 rifle rounds and one handgun round, according to the report. Law enforcement officials fired 440 rounds from rifles, shotguns and handguns. Multiple nearby homes and cars were struck during the gun battle, but there were no civilian injuries.

An autopsy found that Farook suffered 27 gunshot wounds, and his wife was shot at least 15 times.

The report concludes that the 22 officers who used deadly force during the shootout did so in “self-defense and the defense of others,” and they were therefore legally justified in their actions.