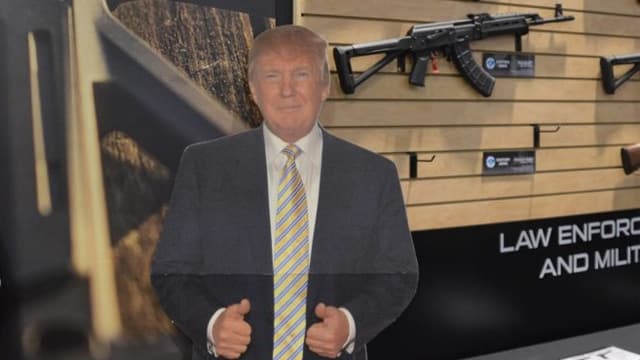 Century Arms, an importer of a number of guns from overseas, featured a Trump standee at its booth during SHOT Show in January 2017. (Photos: Chris Eger/Guns.com)

If the Trump administration softened sanctions against Russia — like an official said the president has been considering — that could increase the supply of popular AK rifles commercially available in the U.S., but it could also bolster the rapidly developing narrative that the president’s campaign colluded with Russian officials before the election.

An administration official this week sent mixed messages as President Trump met with NATO leaders during his trip abroad. His director of National Economic Council, Gary Cohn, said during Wednesday’s meeting with reporters on Air Force One the president had the sanctions on his mind.

“I think the president is looking at it. Right now, we don’t have a position,” Cohn said.

But he walked back the statement on Friday, saying the administration will not be lifting sanctions on Russia and “If anything, we would probably look to get tougher on Russia.”

The issue returns four months after the Treasury Department eased some sanctions on FSB, the Kremlin’s intelligence agency, enacted by a 2015 executive order signed by former President Obama to punish Russia for “engaging in significant malicious cyber-enabled activities.” The sanction adjustments allow for the import of U.S.-made information technology products into Russia.

Further easing could benefit Russian gun manufacturers as well as give American gun buyers more choice. According to International Trade Commission data, the U.S. imported some 204,788 firearms of all kinds from Russia in 2013, but that number has been reduced to just 9,556 in 2015 because of sanctions.

While the president now maintains he would not lift sanctions on Russia, particularly those imposed for the Kremlin’s invasion of Ukraine in March 2014, he had floated the idea before and at least one member of his cabinet had actively pursued it.

Trump’s former national security adviser, Michael Flynn, had at least one conversation with a Russian official regarding the lifting of sanctions during the Trump team’s transition into the White House — something Flynn lied about and was forced to resign over. At the time of the meeting, Flynn, who had been working with the Trump campaign before the election, was being vetted for a cabinet position.

Flynn was recently subpoenaed by the Senate Intelligence Committee as part of its investigation into Russian collusion. He pleaded the Fifth, keeping the committee from viewing documents it sought and protecting him from self-incrimination. The retired Army lieutenant general in March requested immunity from prosecution in return for his sworn testimony on the matter.

Still, some lawmakers see more value in admonishing Russia for its misbehavior — including the invasion of Ukraine and the Kremlin’s alleged meddling in U.S. elections — and holding the Trump administration accountable for undoing sanctions earlier this year.

Shortly after the Treasury Department’s February action, lawmakers introduced a bill to ensure checks and balances were maintained between the branches of government. Since the “Russia Sanctions Review Act” was introduced, 27 Democrats and 15 Republicans have signed on to ensure that the lifting of any sanctions on Russia is first approved by Congress.

The move came amid fears of collusion between the Russian government and the Trump campaign during the 2016 presidential election. Some believe that secretive relationship persists into the president’s fifth month in office, to the tune of several investigations into the matter.

One investigation, being conducted by the Federal Bureau of Investigation, was stymied when Trump fired its director, James Comey. Before the firing, Trump reportedly asked Comey for his loyalty and for him to drop the Russia investigation. Comey offered his truthfulness, but not his fealty. Trump then tried to recruit top officials in the intelligence community to publicly attack Comey. The heads of both the National Security Agency and National Intelligence both turned down the president’s request.

Some have called Trump’s move unprecedented, dubbing the scandal “Kremlingate” and comparing it to President Richard Nixon’s own troubled administration. The NSA chief in an address to his subordinates revealed what the president had asked of him and went even further.

“There is no question that we have evidence of election involvement and questionable contacts with the Russians,” Admiral Mike Rogers reportedly said early this week.