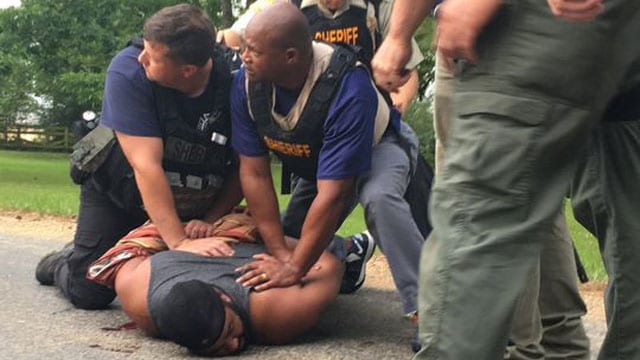 What began as a domestic dispute in Lincoln County, Mississippi, Saturday night left seven of the suspect’s family members and a sheriff’s deputy dead across three separate crime scenes.

The deceased deputy was identified by the Lincoln County Sheriff’s Office as William Durr, a two-year veteran with the department. The identities of the remaining victims were released Monday and included Barbara Mitchell, 55; Brenda May, 53; Tocarra May, 35; Ferral Burage, 45; Shelia Burage, 46; Jordan Blackwell, 18; and Austin Edwards, 11.

Sources close to the family say all of the victims, except the deputy, were related to the suspect by either blood or marriage.

Police were first called to Vincent Mitchell’s home in Bogue Chitto around 11:30 p.m. Saturday after the suspect, Willie Corey Godbolt, showed up at the home to take his kids. Godbolt’s estranged wife, who is Mitchell’s stepdaughter, had been staying at the home with the couple’s two children for about three weeks after she left Godbolt. According to Mitchell, Godbolt and his wife had gone “back and forth for a couple of years with that domestic violence.”

Mitchell said Godbolt was there because he wanted his kids, but Mitchell called the police and asked him to leave. Soon thereafter, Deputy Durr arrived on the scene.

“He acted like, motioned like, he was fixing to go,” Mitchell said of Godbolt. “Then he reached in his back pocket and grabbed a gun. He just started shooting everything.”

Mitchell said he and Godbolt’s wife escaped unharmed, but four others in the home weren’t so lucky. Mitchell’s wife, her daughter, her sister and the deputy were all killed.

Godbolt then left Mitchell’s home and went to another residence in Brookhaven where the bodies of the two youngest boys were found. Witnesses say the homeowner received a call about Godbolt from a friend, then a short time later, he showed up at the house, shot around the lock, and kicked in the door.

As authorities were in the middle of processing the first crime scene, police received word Sunday morning that Godbolt was at a third residence, where the remaining two victims were found. Police responded to the scene and Godbolt led them on a brief foot pursuit, during which time he was shot in the arm.

With the help of numerous law enforcement agencies, Godbolt was taken into custody Sunday morning. He will be charged with one count of capital murder and seven counts of first-degree murder.

A short time after his apprehension, as he sat handcuffed in the middle of a street, Godbolt admitted to a reporter with The Clarion-Ledger that he not only killed the victims, but intended to die as well through “suicide by cop.”

“I ain’t fit to live, not after what I done,” Godbolt told the reporter, also stating that he didn’t necessarily target the deputy, “he was just there.” Godbolt said the deputy tried to intervene and it cost him his life.

Godbolt’s injuries are not considered life-threatening.

As news of the deadly rampage spread, Mississippi Gov. Phil Bryant issued a statement and asked for prayers for the community.

Erica Jones, leader of the Mississippi chapter of Moms Demand Action for Gun Sense in America, and former Congresswoman Gabrielle Giffords, co-founder of Americans for Responsible Solutions, both called the incident “tragic” and called for better ways to prevent such violence at the hands of domestic abusers.