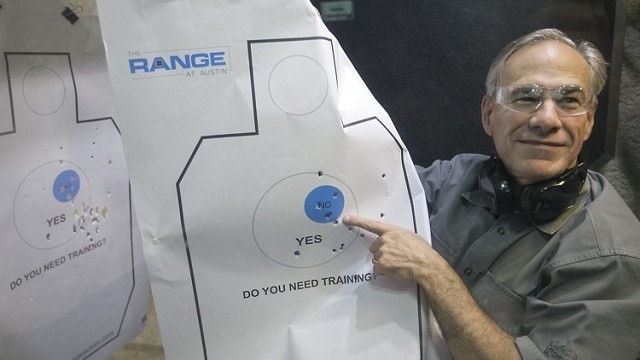 Texas Gov. Greg Abbott holds up his target sheet to reporters after firing off a couple rounds at an Austin shooting range. (Photo: Austin American-Statesman)

Texas Gov. Greg Abbott took some heat this weekend for seeming to joke about shooting reporters after signing a bill that will reduce handgun permit fees in the state.

The Texas Tribune reported Abbott signed Senate Bill 16, which reduces first-time handgun permit fees from $140 to $40 and renewal fees from $70 to $40, on Friday at an Austin shooting range and then fired off a couple rounds.

After the shoot, Abbott held up his used target sheet and quipped: “I’m gonna carry this around in case I see any reporters.”

The comment did not sit so well with members of gun-control group the Brady Campaign, who had the following to say in a Facebook post: “The governor of Texas made a dangerous and out of line joke. We’ve seen time and time again these type of words insight violence. Words matter. #ENOUGH.”

Reporters Without Borders, an organization based in Paris, also criticized the remark, noting it was especially troubling after Montana Republican Representative-elect Greg Gianforte’s alleged assault on a Guardian reporter.

“Politicians must condemn this dangerous rhetoric against reporters as it can quickly escalate to physical violence like we saw in Montana,” the group added.

“Texas is known for its strong Second Amendment rights laws, and I’m proud to further strengthen those rights today,” Abbott said of the measure. “No law abiding Texan should be priced out of the ability to exercise their Second Amendment rights. I’d like to thank Senator Robert Nichols and Representative Phil King for their work in expanding liberty in Texas.”

The bill will take effect Sep. 1.