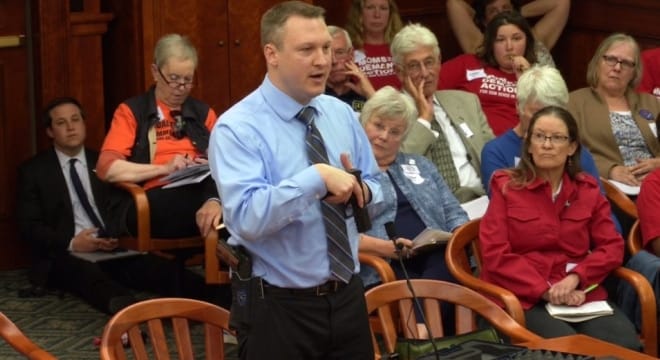 A package of bills backed by Republicans to allow law-abiding Michigan residents to carry concealed handguns without a permit passed a key House committee Tuesday.

The measures, HB 4416, 4417, 4418, and 4419 by Reps. Hoitenga, Hornberger, Allor, and Cole, won approval from the House Judiciary Committee 6-4. The sponsors argue open carry without a permit or training is already legal in the state.

“It only becomes illegal when someone puts on a coat, because the gun then becomes concealed,” said Rep. Michelle Hoitenga, R-Manton, in lengthy testimony earlier this month to the committee. “One millimeter of clothing makes a difference between a criminal act and a legal act. My question is, why are law abiding citizens paying expensive fees for courses and permits to exercise their constitutional right to bear arms?”

The bills would repeal a host of Michigan’s laws that require training and a state-issued permit to carry a concealed firearm. They do not eliminate the state’s permitting system for those who wish to obtain a $105 license to carry to take advantage of existing out-of-state reciprocity agreements. Those currently unable to possess a firearm by law would still be barred from carrying.

The Fraternal Order of Police as well as state and national gun control organizations, who packed nearly three hours of hearings before the Committee, oppose the package, arguing the current mandated eight-hour safety class is needed for public safety.

“To put a firearm in the hands of someone with no required training to us is absolutely absurd,” said David Hiller, executive director of the Michigan FOP. “We stand absolutely opposed to the legislation.”

Michigan Open Carry argues that the bills would allow someone openly carrying to get into their vehicle while wearing their handgun instead of securing it beforehand, saying members have been charged with felonies in just such an occasion. The group further held that by taking a handgun out of the holster in public to secure it in a box or container for transport under current law is dangerous and opens them to the increased possibility of negligent discharges.

“This is one of those laws that has produced a result that was not intended,” said MOC President Tom Lambert in testimony. “It requires law abiding people that have gone through the background checks to handle their firearms more than needed.”

The legislation now heads to the House floor where it would need to pass before heading to the Senate and the desk of Gov. Rick Snyder.