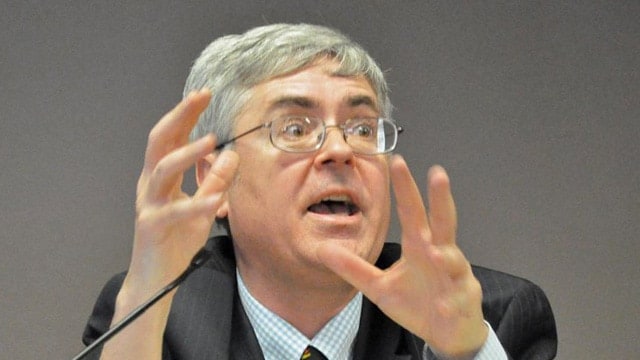 In the wake of a deadly, racially charged stabbing on Friday, a Republican in Portland says he’s considering using militia groups for security.

Multnomah County GOP chair James Buchal told the Guardian a security force would be an appropriate thing to consider for public events as tensions fester.

“I am sort of evolving to the point where I think that it is appropriate for Republicans to continue to go out there,” Buchal said. “And there are these people arising, like the Oath Keepers and the Three Percenters.”

“Because there are now belligerent, unstable people who are convinced that Republicans are like Nazis,” he said.

The comments come just days after a deadly rampage on a light rail train. Police say Jeremy Joseph Christian, 35, was directing an anti-Muslim tirade at two women. When three men intervened, authorities say Christian attacked them with a knife, killing two of them, and injuring the third. Prosecutors say he confessed to the rampage after his arrest. In a court appearance on Tuesday, Christian shouted, “You call it terrorism, I call it patriotism!”

For Buchal, it was the cancellation of a parade late last month that first attracted him to the militia groups. The Avenue of the Roses parade was shut down after an anonymous email promised to disrupt it.

“There is definitely something wrong if criminal gangs are essentially allowed to shut down normal and traditional activities of Republicans,” Buchal said. “With that climate arising, the question becomes: what do you do? A lot of the rank and file party members are old and frail people. They are intimidated by what’s going on.”

In an open letter published Tuesday, the Center on Extremism at the Anti-Defamation League urged Buchal not to use militia groups for security purposes.

“We think it is important for you to know that the Oath Keepers and Three Percenters are not a benign ‘security force.’ They are, in our judgement, militia-style, anti-government extremist groups,” the letter says.

In a blog post on the Oath Keepers website, David Codrea weighed in on the heated politics of the incident, and addressed the idea that the attack in Portland was “Donald Trump’s fault.”

“If political and media opportunists really want to play the game of blaming races and ideologies, plenty of counter-examples can be provided, including the inconvenient truth that the alleged killer appears to have been a Bernie Sanders supporter, and the only reason he’s glad Trump beat Hillary was ‘I take the fast poison over the slow any day,’” Codrea said.