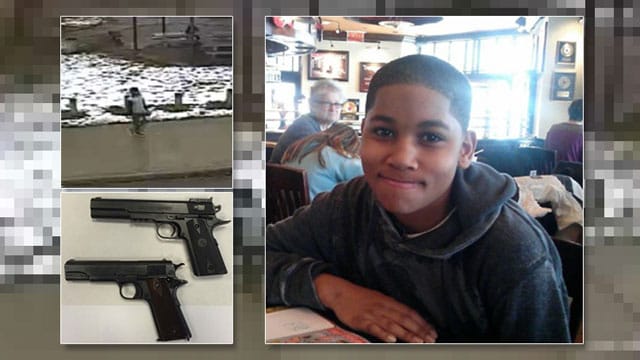 Photo compilation: 12-year-old Tamir Rice; a comparison of the Airsoft replica he was carrying the day he was killed with a real 1911 Colt pistol it was modeled after, according to officials. Rice was fatally shot by an officer in a Cleveland park on Nov. 22, 2014.

The police officer who fatally shot 12-year-old Tamir Rice in a Cleveland park more than two years ago has been fired from his position with the police department for discrepancies found on his employment application.

Director of Public Safety, Michael McGrath and Cleveland Police Chief Calvin D. Williams announced the decision Tuesday at the conclusion of the multi-agency investigation into the 2014 shooting.

An independent investigation conducted by the Department of Public Safety Office of Quality Control revealed that former Cleveland Patrol Officer Timothy Loehmann “was not truthful in statements made in his personal history” portion of his employment application. More specifically, Loehmann failed to disclose that, prior to his employment with the Cleveland Police Department, at the end of six-month probationary period with the Independence Police Department, Loehmann’s performance was found to be unsatisfactory.

According to documents, the Independence Police Department determined Loehmann was “emotional [sic] immature” and had the “inability to emotionally function.” In addition, during a firearms qualification course, Loehmann “could not follow simple directions and had an emotional breakdown,” causing him to be sent home for the day.

Then, in a follow-up interview with the Cleveland Police Department prior to his employment there, Loehmann still failed to correct any false answers or statements submitted on his application, despite being given the opportunity to do so. It was police officials’ opinion that the discrepancies were grounds for termination.

In addition to the measures taken against Loehmann, who fired the two fatal shots at Tamir, Officer Frank Garmback, who was driving the patrol car that day, received a 10-day suspension for failure to “employ proper tactics.” Specifically, when arriving on the scene, Garmback pulled the patrol car too close to the subject in question, who – given the information they had at the time – the officers believed to be a grown man with a real gun, according to the report.

Constance Hollinger, a dispatcher with the Cleveland Police Department, was also given an eight-day suspension in January for failing to provide the responding officers with all of the details she had been given surrounding the incident.

Numerous calls had come into the police station that day — Nov. 22, 2014 — about the boy in the park who was pointing a gun at passersby. Callers indicated the subject was terrorizing passersby and instilling fear, although one caller did indicate she felt the subject was a juvenile and the gun “probably fake,” two details which were not disclosed to officers Loehmann and Garmback.

However, as the officers arrived on the scene, Tamir reached for the gun, which was tucked into his waistband, and pulled it out within plain view. Within seconds, shots were fired, and Tamir fell to the ground. It wasn’t until after the shots were fired that the officers realized the gun carried by Tamir was an airsoft gun with the orange tip removed.

Two weeks after the shooting, Tamir’s family filed a lawsuit against the city and the officers involved, which the City of Cleveland settled in April 2016 for $6 million.

In December 2015, the officers were cleared of any criminal charges, although an investigation by the Department of Justice did find that the Cleveland Police Department often used excessive and unnecessary force.