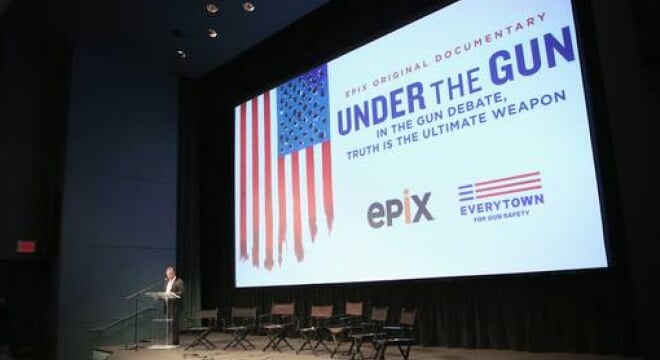 A federal court found Wednesday that a Second Amendment group interviewed for the film could not prove filmmakers intentionally manipulated footage to defame them.

U.S. District Judge John A. Gibney, Jr, in his 11-page ruling, held that Katie Couric, director Stephanie Soechtig, production company Atlas Films and distributor Epix, did not damage the reputation of the members of the Virginia Citizens Defense League in the film Under the Gun.

At the heart of the suit, filed last September, VCDL members claimed filmmakers used deceptive editing to cast them as inept.

The suit centered on footage contained in the final version of the film showing an interview with VCDL members “sitting silently, stumped, and avoiding eye contact for nearly nine seconds after Couric asked, ‘if there are no background checks for gun purchasers, how do you prevent felons or terrorists from purchasing a gun?’”

Attorneys for the group claimed filmmakers took license and — instead of the six minutes of responses that the VCDL members had provided — inserted awkward silent footage taken during a “calibration check” in which they were asked to remain quiet by the production crew for 10 seconds.

A hearing to discuss the case and the defendants’ motion to dismiss the suit was conducted in February.

Lawyers for the VCDL argued the way the film was edited made their members, some of whom are federally licensed gun dealers, look incompetent.

“What they did was deceive people into believing they had witnessed stupidity, ridiculousness, and ineptitude with their own eyes,” said attorney Thomas Clare, pressing the gun rights group’s case. “And that is defamatory when you do it in video setting.”

Attorney Nathan Siegel, representing Soechtig’s film company, Atlas, told the court the edit was not defamatory as it did not cross the threshold by law of general disgrace, scorn or reprehensibility.

Attorneys for Couric argued her role in the film was as an executive producer and to conduct interviews, and that, while she was aware of the final edits done to the controversial scene, she didn’t make the edit and could not have stopped the film’s release.

Delaware-based Epix, owned in part by Viacom, Paramount, MGM and Lion Gate, told the court they acquired Under the Gun — which they have subsequently pulled — after it premiered at Sundance and played no role in the creation or editing of the film.

In his ruling this week, Gibney held the filmmakers did not cross the line.

VCDL took to social media after the news of the dismissal became public Wednesday, pointing out that Gibney was a nomination to the court by President Obama recommended by Virginia’s Democrat Sens. Jim Webb and Mark Warner and was confirmed by the Senate during the lame duck session.