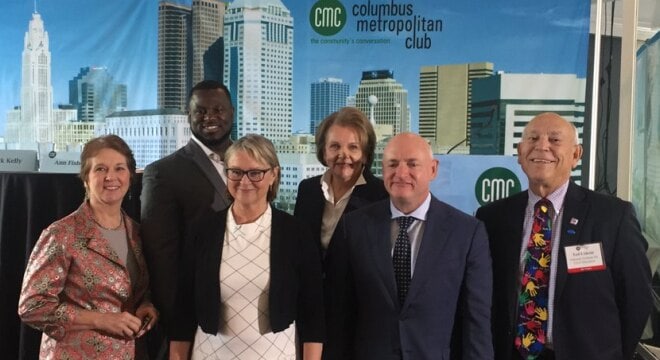 Capt. Mark Kelly was on hand at the Columbus Metropolitan Club on Wednesday with the avowed purpose to bring Ohio community leaders together to address gun violence in the state. (Photo: Americans for Responsible Solutions)

A former Arizona lawmaker and her astronaut husband behind Americans for Responsible Solutions this week founded the group’s eighth state-based franchise since 2015.

Mark Kelly debuted the Ohio Coalition for Common Sense at the Columbus Metropolitan Club on Wednesday with the avowed purpose to bring community leaders together to address gun violence in the state.

“We are here to say one simple thing: ‘Enough.’ We are here to say it’s time for our leaders to do more to address the gun violence crisis that is tearing our communities apart and that makes our country and Ohio stand out in the worst of ways,” said Kelly, as reported by the Dayton Daily News.

The gun safety advocates argue each state has loopholes in its gun laws that need to be addressed, prompting the need for the local group to push for expanded background checks, increased reporting of mental health records by the state to the Federal Bureau of Investigation’s National Instant Criminal Background Check System, and taking guns from an expanded pool of domestic abusers.

Per the Center for Responsive Politics, the Americans for Responsible Solutions super PAC spent $13.4 million in the 2016 election cycle, down from the $19.5 million invested backing gun control in 2014.

Buckeye state gun rights advocates feel the push by the former congresswoman, wounded in a shooting in 2011, is misplaced.

“What Gabby Giffords went through was absolutely horrific. For her to overcome such hardships and accomplish what she has, is nothing short of extraordinary. It has given her a platform in the public spotlight to truly make a difference,” Brett Pucillo, with Ohio Carry, told Guns.com. “However, rather than use that platform to tackle issues at the heart of violence, she has chosen to attack the firearm rights of Americans everywhere in a misguided attempt to cure ‘gun violence.'”

Pucillo feels the new Ohio-based group will seek to strip gun rights by selling what he describes as a false sense of security labeled as “common sense.”

“This is as disheartening as it is misconceived,” said Pucillo. “The rhetoric being forced upon America by this new and fleeting group is the same emotional blather that has been spewed for years by similar factions of anti-Second Amendment extremists.”