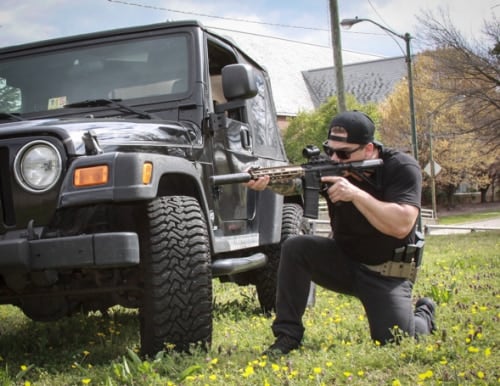 The QRS offers gear on the ready for quick deployment. (Photo: HTC)

High Threat Concealment expanded its lineup of modular gun belt systems with the addition of the Quick Response System, offering a scalable rig at the ready.

The QRS comes standard with a Vantage OWB holster, a built-to-order three-piece magazine panel and a two-piece Tactical Cobra Belt that includes an under-belt and removable micro grip panel. The system allows users to keep their gun and gear prepped for use should a threat materialize.

Using AustriAlpin’s fast attach/quick release Cobra Buckle the belt is designed to be easily slipped on, taking only a few seconds according to HTC. Alongside the micro grip panel, the belt system can be secured around the waist without the need for under-belt or pant belt loops. Shooters in need of additional stability can use the included under-belt in place of the micro grip panel. The under-belt locks the equipment in place without the need for belt keepers. The Tactical Cobra Belt and standard under-belt measure 1.75-inches. 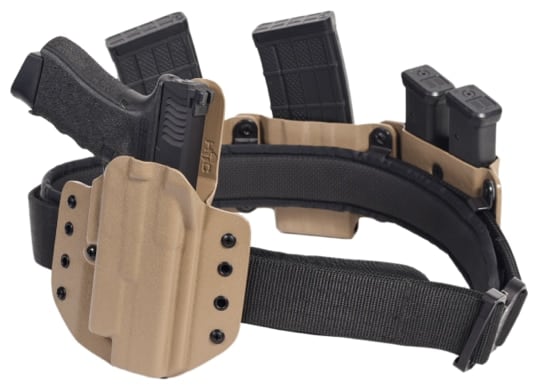 The system is available in black or coyote tan, pictured above. (Photo: HTC)

Shooters in need of a little more oomph can upgrade the standard belt in favor of HTC’s Everyday Tactical Belt. The EDT offers quick attach and detach of the QRS while also functioning as an everyday carry belt when not equipped with the system. The QRS also works alongside the company’s Low Pro Belt, which offers maximum concealment. Belts ship in either black or coyote tan.

The Vantage Holster and Mag Panel are made to order from premium grade Boltaron. Available in either black or flat dark earth, the holsters are custom built to match the specific make and model of gun, along with after-market features such as weapon mounted lights.

The rig ships already assembled on the Tactical Cobra Belt with the micro grip panel attached to the interior lining. Additional pouches and radios can be added to customize the rig based on user needs. Consumers can contact HTC for suggestions and help with upgrades.

The QRS is available from HTC and is priced at $395.