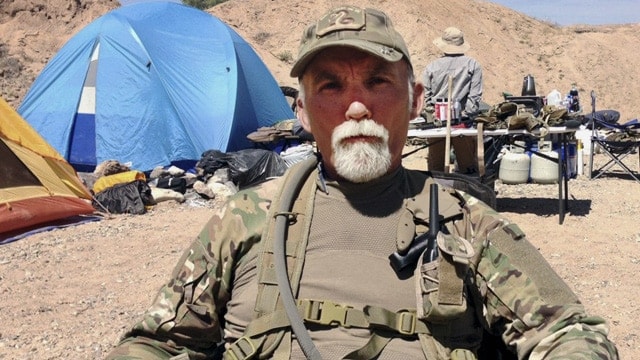 A federal judge sentenced a New Hampshire man to more than seven years in prison on Wednesday for his role in the armed standoff at Cliven Bundy’s Nevada cattle ranch in 2014.

Gerald “Jerry” DeLemus, 62, was sentenced to 87 months in prison, and three years of supervised release, according to a press release from the U.S. Attorney’s Office in Nevada.

DeLemus is the first person to be sentenced in connection with the “Battle of Bunkerville,” a six-day standoff between armed ranchers and U.S. Bureau of Land Management officials. The feds showed up in April 2014 to take Bundy’s cattle in lieu of $1 million worth of backed grazing fees he refused to pay for more than 20 years. That’s when sympathizers came from all over the country to support the Bundy family.

DeLemus pleaded guilty in August to one count of conspiracy to commit an offense against the United States and one count of interstate travel in aid of extortion. In his plea agreement, he admitted to calling Bundy on April 8, 2014 and agreeing to bring guns and other gunmen from New Hampshire to Nevada.

“When he traveled to Nevada, defendant DeLemus joined in a conspiracy with Bundy and others associated with him and intentionally traveled in interstate commerce to display force and aggression in order to influence a federal law enforcement officer, and thereby impede or interfere with that officer’s duties,” the agreement says.

DeLemus is a Marine Corps veteran who co-chaired the Veterans for Trump organization launched by President Trump’s campaign last year. His wife, Susan DeLemus, served as a Republican lawmaker in New Hampshire.

“I never heard you say you told Mr. Bundy … to follow the law,” she said.

Prosecutors were expected to argue for a six year sentence as part of the plea deal. But in January, DeLemus tried to withdraw his guilty plea. Navarro denied the motion to withdraw, and told DeLemus she believed he didn’t accept responsibility for his actions.

“I have to say, Mr. DeLemus, that you unfortunately are blinded by the information you choose to believe,” she said.

DeLemus said he made the cross country trip because he heard government snipers had surrounded the Bundy home. “My concern was that someone would get hurt,” he said, holding back tears. “It wasn’t the cows. I didn’t want that family injured. God will know in the end.”

DeLemus is expected to appeal.  Another 18 people are in custody in connection with the standoff. In April, two men were found guilty on multiple counts in connection with the standoff. A jury deadlocked on charges for four other men in that trial. They’re expected to face a new trial later this month. Two other trials are scheduled later this year, including one for Cliven Bundy and his sons.