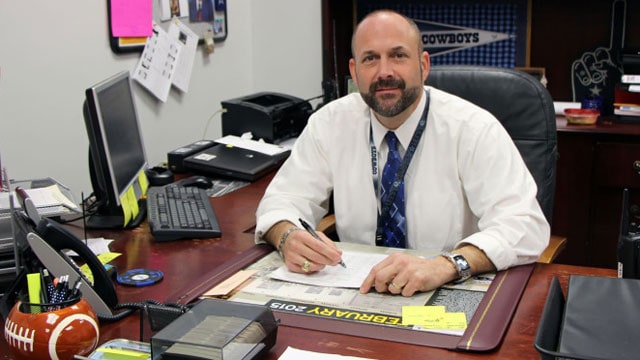 In the moments leading up to what appeared the suicide of a Texas high school principal, he was apparently confronted about an alleged affair with the school secretary and given a choice to either face an investigation or resign.

The new details are in stark contrast to what was originally said by the school superintendent.

Kirbyville High School Principal Dennis Reeves was found inside his truck May 23 with what appeared to be a self-inflicted gunshot wound. The truck was in the school parking lot.

School officials said earlier in the day Reeves was in a meeting and submitted his resignation. The resignation – and the suicide – was abrupt and unexpected, but Kirbyville Superintendent Tommy Wallis initially said Reeves chose to resign and wasn’t faced with termination or otherwise forced out.

However, according to a recently-surfaced statement Wallis gave the police, Reeves, who is married with two children, was confronted about an affair with the school secretary during the meeting.

“She stated the relationship began as a friendship and it turned into a romantic affair,” Wallis said in a statement to police. “She stated Mr. Reeves told her that if their relationship was uncovered he would kill himself and that he would make it look like an accident so the insurance company would pay his family.”

While Reeves’ death appears to be a suicide, the investigation, which will included gunpowder residue tests, is ongoing.

Meanwhile, on Tuesday, Kirbyville Assistant Principal Charles Simmons also resigned, although he made it clear he was not asked to do so and it was not because he was “distraught” over Reeves’ death.

“I’m not sure where I will end up, but I do know that if I were to stay under the present circumstances it would compromise my integrity and it would not be loyal to Dennis,” Simmons said in the email to school staff. “For me to keep silent would also be disloyal to our school and our entire district. It’s not what I want to do … it’s the right vs. wrong.”

Simmons was hired by Reeves, although it’s unclear if he was aware of the affair.