APF: A gun company born and bred in Minnesota 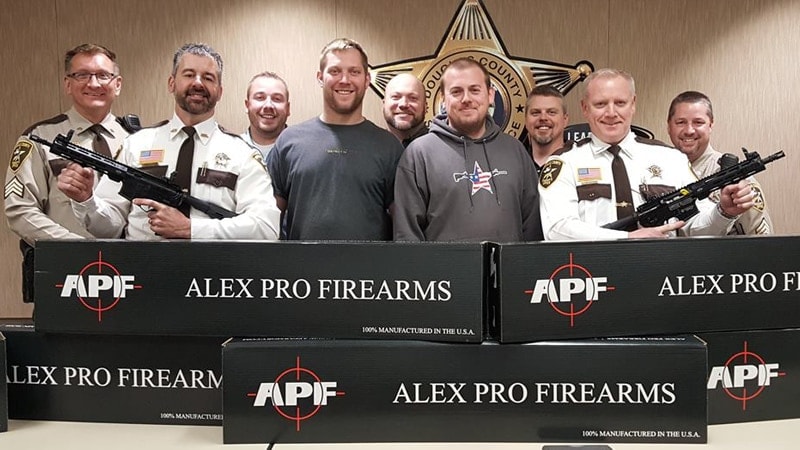 Like lots of gun companies, Minnesota-based Alex Pro Firearms grew amid spiking gun sales. In three short years, APF’s production increased an impressive 11 times over — from 573 rifles in 2014 to 6,333 in 2016 — elevating it from a small shop to a mid-level manufacturer.

Presently, the industry enters unpredictable times, making it more challenging for large gun makers to predict demand and smaller companies to survive. But, this may also be a time for companies like APF to really shine.

“People aren’t worried about, say Hillary taking their guns from them,” said Garrett Streitz, co-owner of APF, about current forces driving sales. “They’re gonna be saving their money and putting it toward a more expensive, ready-to-go firearm.”

That theory is why APF will soon release a new Elite series of AR rifles, equipped with specialized features at a higher-end price-point than a featureless platform built for economy (though APF does have an econo series), as well as a line of suppressors. As Streitz described, his company has always applied that pragmatic attitude toward demand.

The company has carved out a nice little niche for itself, specializing in making a nickel boron bolt carrier group and a wide selection of hunting-caliber AR rifles. Streitz ties APF’s success to finding the right niche, but he also credits their location.

“Minnesota is a pretty proud state where they take — you know, if you’re making something in Minnesota, people really follow that, as far as Minnesotans do,” Streitz said, adding when his company launched, they were able to fill a void left behind when competitor DPMS Firearms moved manufacturing to Alabama.

“That’s why DPMS was so popular in the state. Even though they weren’t owned by a Minnesota-based company, their guns were still being made in Minnesota,” he said.

Jason Leigh, who manages logistics for APF, attested to Streitz’s assessment. “That left a sour taste in a lot of people’s mouths,” he said, basing his opinion on responses he’s received across the state. He described the situation as “good timing” for APF.

Pulling from his prior experience in retail, Leigh echoed Streitz’s characterization of Minnesota gun buyers.

“Minnesota brands were always very, very popular,” he said. “The Minnesota customer base is really proud of what comes out of their home state.”

While APF products are available at retailers nationwide and online, the bulk of its gun sales are in The Gopher State and surrounding areas. Streitz said that most buyers are responsive when you talk to them in person.

“The perks of that (making and selling guns in Minnesota) is we can deliver them ourselves,” he said.

While being from Minnesota helps pique the interest of Minnesotans, interacting with buyers really seals the deal, explained Mike Ahlman, owner of the family-owned Ahlman’s Gun Shop in Morristown, Minnesota. The 74-year-old store is one of the largest in the state and has carried APF since the company launched.

“They come to all the major shoots that we have. Like if we have a promo, you just ask once and they’re here,” Ahlman said, adding his store has three or four demonstrations a year, with one attracting more than 5,000 people. He said APF will bring a trailer, set up a booth and let people test rifles on the range. “Tongues come out,” Ahlman said about audience reaction.

“When you really break it down and show (the customer) what they’re getting — you know, dollar for dollar — compared to some other stuff that’s out there at the same price point, it is a pretty easy choice realistically,” Leigh said about customers testing APF guns.

From Ahlman’s point of view, trust and experience help sell APF rifles more so than location. “What really helps is when I tell (customers) that these guys just aren’t ‘parts put-er togethers.’ I mean they actually make their stuff in-house. They put it together, they test all their stuff well. That helps a lot,” he said.

APF grew out of family-owned machine shop Alexandria Pro Fab in Alexandria, Minnesota. For six years, the company had been contracted by gun companies to make parts, including bolt carrier groups. As the company produced more and more gun parts, eventually it was asked to apply an electroless nickel plating process, which began the development of a specialty in the gun world. Then, in May 2013, APF launched as a spinoff just to make gun stuff.

Continuing with what they knew, they started the business making more parts as well as AR rifles. In that first year, Streitz traveled around Minnesota and both North and South Dakota convincing hunters how the AR could be used for hunting. Streitz explained that he grew up in northern South Dakota and like many other hunters in the area, he used bolt-action rifles. “I never thought of an AR as a hunting gun either,” he said, adding he changed his mind after trying one.

While APF seems to cater to hunters – especially coyote hunters – and competitive shooters, Streitz wouldn’t settle on any one type of buyer.

“Minnesota has a wide variety of shooters,” he said. “You get guys up north who go out and shoot that long distance — that 1,100-yard shot — and then you got guys here who want to take their rifles to the range at 100 yards. That’s what’s great about Minnesota.”

He said APF’s goal is to make customers feel they’re getting a custom option, saying customer service is a primary concern – something a company might lose when they grow too fast or get too big.

Streitz described a scenario in which a prairie dog hunter accidentally ran over his rifle with a truck. “It wasn’t our fault,” he said, but asked the hunter to send in the gun’s upper receiver anyway. APF replaced a bent barrel and other damaged parts.

“Because that’s just a shitty situation. And it’s not like he could just go buy his — it was a .22-250 — he can’t just go buy a new barrel somewhere online to replace it,” Streitz said. “It’s gotta be through us.”