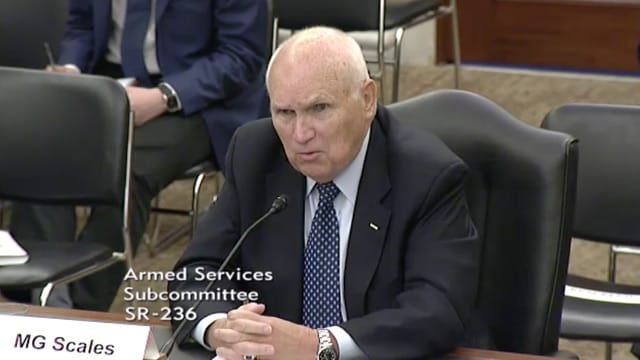 Testifying before the Airland Subcommittee of the Senate Armed Services Committee last month, the 35-year Army veteran outlined the flaws inherent in the M4 carbine and called for the development of a new rifle.

Scales lambasted the Army for decades of preventable infantrymen deaths as a result of the M4 and its predecessor, the M16, which is still widely used.

“Since the end of World War II the richest and most technologically advanced country in the world has sent its Soldiers and Marines into combat with inferior small arms. So inferior, fact [sic], that thousands have died needlessly,” Scales wrote in a statement for the committee.

“If the lives of so many depend on a rifle, why can’t the richest country in the world give it to them?” the statement says, noting that nearly 80 percent of all soldiers killed at the hands of the enemy are infantry.

Battlefield conditions often cause the rifles to jam, Scales said, recalling his time in Vietnam when his unit was overrun, and three of his soldiers were killed in June 1969. “When I rolled their bodies over, they were lying on top of M16s that were broken at the hinge,” he said before the committee. “Any time you find a dead soldier with a rifle broken at the hinge, it meant he died trying to clear a jam.”

In July 2008, nine infantrymen died fighting the Taliban in the village of Wanat in Afghanistan. “Some of the soldiers present later reported that in the midst of battle, their rifles overheated and jammed,” Scales wrote in his statement. “The Wanat story is reminiscent of experiences in Vietnam: in fact, other than a few cosmetic changes, the rifles from both wars are virtually the same.”

“Any dust or dirt or residue from the cartridge might cause the bolt assembly, and thus the rifle, to jam,” he said.

The AK-47 doesn’t have these problems, said Scales, because it uses a solid operating rod attached to the bolt assembly. “The gas action of the AK-47 throws the rod and the bolt assembly back as one unit, and the solid attachment means that mud or dust will not prevent the gun from functioning,” he said.

Making matters worse, Scales said the Army has tried to cover up these issues. After he wrote a piece for the Atlantic outlining the ‘gun trouble’ in January 2015, he says “Army Public Affairs responded that the weapon was fine, as good as it could be.” But a few months later, it became clear they were making more than 100 changes to the M4.

And the jamming problem isn’t all that needs to be addressed, said Scales. “Today’s cartridge is simply too small for modern combat. Its lack of mass limits its range to less than 400 meters,” he said. “The civilian version of the 5.56‐mm bullet was designed as a ‘varmint killer’ and six states prohibit its use for deer hunting because it is not lethal enough to ensure a quick kill. The optimum caliber for tomorrow’s rifle is between 6.5 and 7 millimeters. ”

So what’s to be done about all of this? Scales acknowledged efforts to create a newer, higher caliber rifle, but said the planned seven years to develop the weapon was far too long. He proposed a plan to develop a new, more effective rifle in a year’s time.

He asked senators to authorize an open, one year competition to develop the weapon as part of the 2018 National Defense Authorization Act. Ground combat arms officers should run and oversee the effort, he said, and anyone can compete in designing the new rifle — small business, big business, foreign, domestic, “or even clever individuals.”

The requirements for the rifle, per Scales, would be sixfold. To start, it must be capable of being converted into a carbine, rifle, machine gun, or sniper rifle. The new weapon would have to fire an intermediate caliber bullet, include a suppressor, and be equipped with a snap-on digital sight “capable of killing reliably to a range in excess of 1,000 meters.” It will use a solid recoiling action “like most first-rate assault rifles,” Scales said. And it will be able to fire ammunition in a polymer casing, which provides 30% less weight than brass cartridge casings. Another desirable feature would be an attachment that allows the rifle to fire belted ammo.

After a year, members of Congress, the public, and the media would be invited to watch as the weapons are tested and scored, and the result posted online for review. The winner would get a $100 million contract to manufacture the first 100,000 rifles.

For Scales, he doesn’t want to see the problems of the past affect the infantrymen of the future. “My grandson is ten and I’m very proud of him,” he said. “He tells me he wants to be a Soldier someday. If we leave the Army’s Acquisition bureaucracy in charge of developing our next generation of small arms I’m fearful that he will be walking point some day with the same weapon that failed my Soldiers so tragically fifty years ago in Vietnam. Please don’t allow that to happen.”