My (continuing) quest for the perfect self-defense shotgun slug load 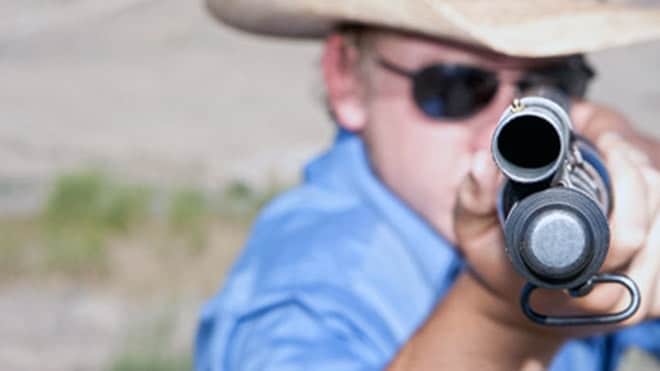 Once again, the author takes to the range with ballistic wax in his quest for the perfect slug load.

In a previous article, I conducted an accuracy and terminal performance test of a home cast slug made using a mold produced by Lee. Accuracy of the slug at 50 yards was lackluster to say the least, so for the second test in my project to examine the numerous 12-gauge slugs available for handloaders, I assembled a bunch of rounds incorporating a projectile that was purportedly engineered to maximize accuracy out of a smooth bore gun. Results were mixed. Eschewing the “Pepsi challenge” format, I decided my next test would focus on a single slug load.

The AQ slug is essentially a one ounce roundball, approximately .732 inches in diameter, that has been modified to fit atop a finned nylon skirt. The plastic fins are intended to cause the slug to rotate in flight thereby increasing accuracy.  The slugs were distributed by Ballistic Products Inc. but a check of the company’s website shows them absent from the inventory.

The load used in my test was assembled according to Data provided by Ballistic Products and was propelled by a charge of 23 grains of Alliant Green dot inside a 2.75 inch multi-hull and finished off with a roll crimp. Velocity, according to the load data should be approximately 1300 f/s. Recoil was manageable. 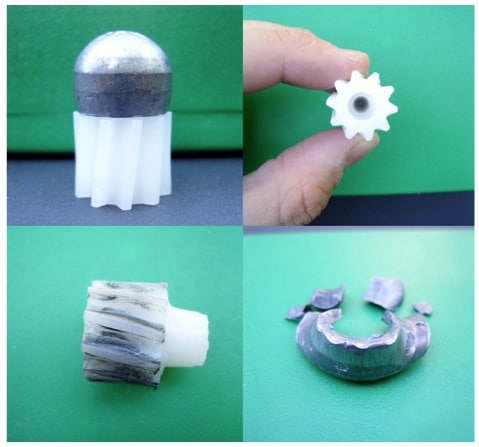 Clockwise from top shows an unfired AQ slug, a view of the slug’s fins, the fins after firing, and the fragments recovered from the ballistic wax. Spin marks inside the barrel of the test gun as well as in the wax indicate the slug did rotate in flight.

I fired a round into my test material at a distance of ten feet and then surveyed the damage. Upon first glance, it became evident that the slug’s plastic skirt disconnected from the lead ball upon firing due to the fact that it was partially embedded in the first wax block three inches away from where the slug actually impacted. Apparently, the finned plastic section was designed to rotate the slug in the barrel, and not while in flight. This makes sense. The fins were badly damaged by the firing process and, had the skirt remained attached, the projectile would have likely flown wild. A spiral pattern inside the barrel of the test gun, as well a swirling of the wax at the point of impact indicated that the lead ball was rotating to some degree.

Separating the blocks showed the slug to be highly frangible. The ball appeared to have remained intact within the test material for four inches before shattering into fragments which didn’t quite penetrate all six inches of wax.

Each of the above blocks of ballistic wax are an inch and a half thick. The AQ slug penetrated three inches of wax before breaking into fragments which penetrated an additional two inches. The maximum diameter of the cavity was just under one inch in diameter. The position of the fin section in the first block indicates that it separated from the slug prior to impact.

A fragmenting projectile isn’t necessarily a bad thing. On thin skinned game such as whitetail deer, a slug or bullet that fragments in the vitals will inevitably destroy a lot of tissue. The flip side of the coin is that the limited amount of penetration offered by such a slug is less than ideal for shots where heavy bone may be encountered, or for angling shots where there is more muscle and bone in the way of the vitals. There are also defensive applications for a frangible slug. Any lead fragments that may exit an attacker will be less likely to penetrate exterior walls compared to a slug that retains most of its mass. It should be noted that a decrease in velocity (which inevitably occurs as distance increases) would have improved the integrity of the projectile. 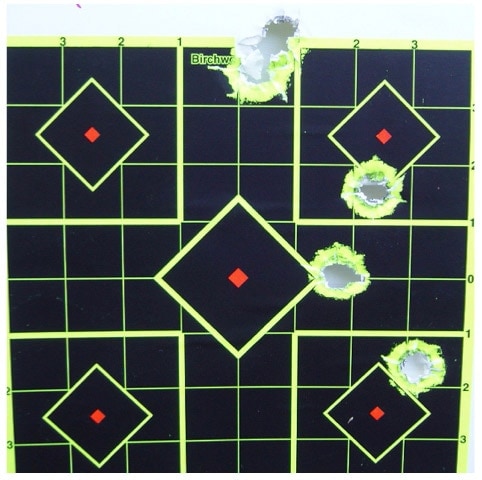 The tested load incorporating the AQ slug produced a diagonal shot string at 50 yards that measured 7 inches in length. Changing the powder and hull type may improve accuracy.

As with the home cast slug I tested in a previous article, 50 yard accuracy was less than stellar. All five rounds strung into a diagonal line seven inches in length. While nothing to write home about, the group does meet my personal requirement for smoothbore accuracy at 50 yards in that it could fit inside an eight inch circle. It is likely that at 25 yards or closer this particular load for the AQ slug would be more than adequate and that group size would shrink with the addition of an optic.

Once again, I had to remind myself that this test was conducted using only one combination of components. Slug guns tend to be very particular about what loads they shoot well and changing out the hull, powder or primer can have a marked effect on accuracy. Regardless, my quest continues.