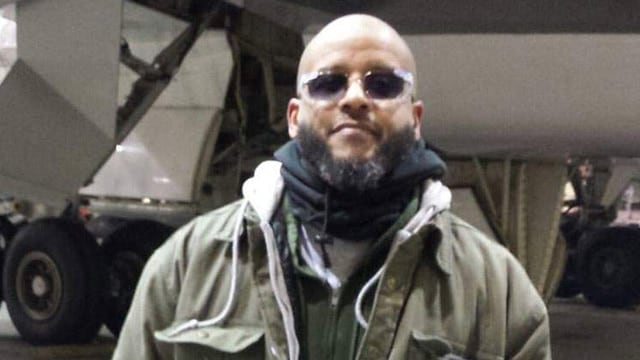 Tairod Pugh, a former mechanic for the Air Force, had been reported to the FBI in 2001 for sympathizing with Osama bin Laden and expressing “anti-American sentiment.” (Photo: Facebook)

A U.S. Air Force veteran was sentenced on Wednesday to 35 years in prison for trying to join ISIS.

Tairod Pugh, 49, of New Jersey, was found guilty by a federal jury in March 2016 for attempting to provide material support to the Islamic State, and for obstruction of justice, according to a news release from the U.S. attorney’s office in the Eastern District of New York.

“After moving to San Antonio, Texas in or about 1998, (Pugh) converted to Islam and became increasingly radical in his beliefs,” wrote FBI Special Agent Ghailan Stepho in an affidavit in support of Pugh’s arrest in 2015.

In 2001, Pugh started working as a mechanic for American Airlines. That same year, a co-worker tipped off the FBI, saying he sympathized with Osama bin Laden, and expressed anti-American sentiment. Pugh worked in Iraq as an Army contractor for a time around 2010 and had been living in Egypt, Dubai and Jordan for about a year and a half before his arrest.

On Jan. 10, 2015, Pugh was stopped at Ataturk Airport in Istanbul, Turkey. He told authorities he was a pilot with the United States Special Forces, and was in Turkey for vacation. Turkish officials suspected he was in the country trying to cross the border into Syria. He refused to let them access his laptop, and eventually, authorities denied him entry, and sent him back to Egypt, where he was detained.

He had been traveling with various electronic devices and it “appeared that (Pugh) had purposefully tampered with the …(devices) to prevent anyone from accessing his electronic media,” wrote Stepho. His laptop had water damage, his iPod was wiped clean of data, and several USB thumb drives were missing their outer casings and were damaged. When Pugh gave authorities the password to his cell phone, they found photos of a machine gun, airplanes, airplane toilets and other images.

He was quickly deported to the United States, and the FBI’s Joint Terrorism Task Force got a warrant for his devices, which they took possession of on Jan. 11, 2015.

During their investigation, Pugh’s wife told authorities he’d told her on several occasions that he planned to travel to Palestine to “join jihad.”

When the feds searched his devices, they found a letter to his wife. “I am a Mujahid,” the letter began. “I am a sword against the oppressor and a child for the oppressed. I will use the talents and skills given to me by Allah to establish and defend the Islamic States. There is [sic] only (two) possible outcomes for me. Victory or Martyr.”

“If I sell myself to Allah: (one) night guarding the borders for the sake of Allah is worth more than the world and all it contains,” the letter read.

Authorities also discovered about 180 jihadist propaganda videos on his laptop, including an execution video. “This video shows the prisoners being captured, lined up, and shot in the head, one by one,” wrote Stepho in the affidavit.

“This video shows the prisoners being captured, lined up, and shot in the head, one by one,” wrote Stepho in the affidavit.

“In the months before he attempted to join ISIS, the defendant made statements to coworkers and on social media establishing his support for ISIS, including advising Facebook followers to ‘support [ISIS] with your bodies,’” says the U.S. attorney’s office press release.

Authorities also found a chart showing crossing points between Turkey and Syria, which was downloaded to his laptop on Jan. 5, 2015 just five days before he flew to Turkey. On Jan. 16, 2015, less than a week after he attempted to enter Turkey, he was arrested in New Jersey and indicted in Brooklyn.

“The defendant turned his back on his country, and the military he once served, to attempt to join a brutally violent terrorist organization committed to the slaughter of innocent people throughout the world,” said Acting U.S. Attorney Bridget Rohde.