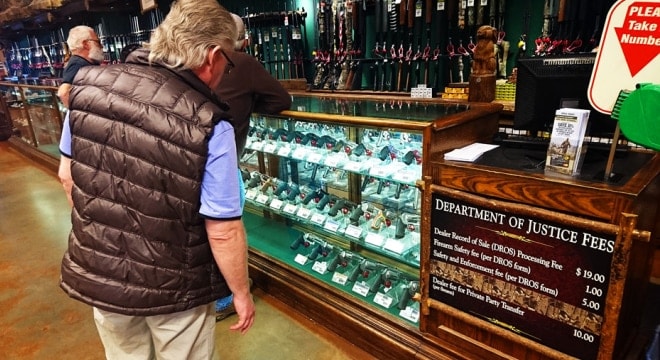 The California Department of Justice collects a mandatory DROS fee on each gun sold, a portion of which pays for a program to collect firearms from those no longer legally able to have them. (Photo: la6nca.net)

A federal court last week found that the Dealer Record of Sale fees collected to fund a California program to confiscate guns is constitutional.

A unanimous three-judge panel of the U.S. 9th Circuit said that California’s allocation of $5 of the $19 fee on firearms transfers to fund law enforcement efforts to collect guns from those the state deems no longer able to possess them met public safety needs.

Unlike many states, the California Department of Justice collects a mandatory DROS fee on each gun sold. The fee provides funding for the state’s controversial Armed and Prohibited Persons System, which sends agents to recover once legally owned firearms from those who have been adjudicated no longer eligible to own them by the state.

Attorneys for plaintiff Herb Bauer, a federal firearms licensee in Fresno, as well as four gun purchasers who paid the mandated fees over a multiyear period, argued it bordered on an unauthorized tax that was expanded over the years to include funding programs that were never part of the original mandate.

The state argued that the use of DROS money since 2011 to fund the gun confiscation program was a “common sense connection” between the payment of a fee to ensure that people who want firearms in California and the “use of that fee to recover firearms from persons who become prohibited from possessing them.”

The panel, composed of Chief Judge Sidney Thomas and Circuit Judges Ferdinand Fernandez and Mary Murguia, upheld a 2015 decision by a lower court, saying the fee system and the APPS program met a public safety interest.

Pointing out the fee on a constitutional right was not meant to generate revenue, but rather to fund the firearms program, Thomas said it survived scrutiny.

“The other federal courts that have considered firearm licensing or registration fees under the fee jurisprudence framework have similarly upheld those fees, each of which was larger than the challenged portion of the DROS fee here,” said Thomas.

The decision could be appealed to the full circuit and then to the Supreme Court.