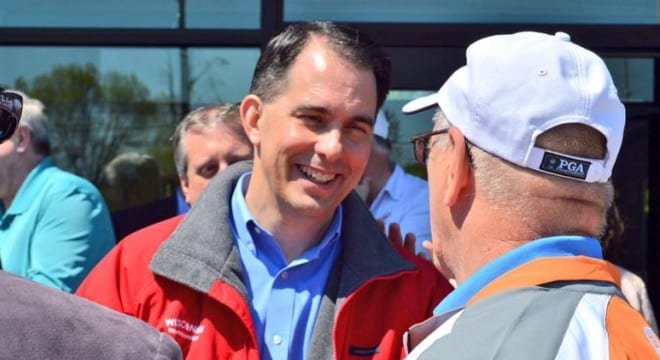 Gov. Scott Walker stopped short of endorsing SB 169, a measure introduced with the support of 40 state Republicans which would keep in place the state’s concealed carry permitting system for those who want it while making it optional for those who want to carry without a license. As the measure drew attention at public hearings in a Senate committee last week, Walker said he was happy with the current law.

“I think it’s really important to assess where we’re at, which I think is good,” said Walker, as reported by the Wisconsin State Journal. “I didn’t like the fact that years ago we didn’t have concealed carry. We have it now. But I think it’s appropriate to have the license — the permit process a part of that.”

The one-time GOP presidential candidate who spoke at length about concealed carry permits while addressing the National Rifle Association’s annual meeting while on the campaign trail, Walker has signed a number of pro-gun bills into law including Castle Doctrine reform, carry expansions and ending the state’s waiting period on handguns. Last year, he directed Wisconsin Attorney General Brad Schimel to act against President Obama’s executive orders on gun control.

However, national gun control advocates backed by former New York Mayor Michael Bloomberg were quick to welcome Walker’s remarks as a buoy to their efforts. Citing polling paid for by the groups that contend 91 percent of respondents said they back the current permitting scheme, Christina Krasovich with Moms Demand Action said the group was “relieved to hear that Gov. Walker, like the overwhelming majority of Wisconsinites from across the political spectrum, supports our state’s concealed handgun permit requirement.”

Krasovich pointed to the fact that Wisconsin’s Professional Police Association stood in opposition to the measure as further proof that “legislators should heed the concerns of law enforcement and reject any attempt to dismantle this common-sense public safety standard.”

So far this year both North Dakota and New Hampshire have approved constitutional carry, bringing the number of states that have adopted the practice to at least 12. Lawmakers in two other states, South Dakota and Montana, approved similar proposals only to see them vetoed by their respective governors.