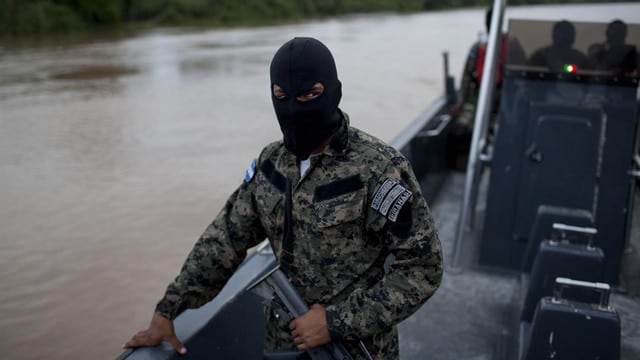 In this May 21, 2012, file photo, Honduran Navy officers patrol in Patuca river, near Ahuas, a remote community in La Mosquitia region, Honduras. The U.S. Drug Enforcement Administration misled the public, Congress and Justice Department officials about an aggressive strategy that led to a series of deadly confrontations involving agents in Honduras, government watchdogs wrote in a scathing report released May 24, 2017. (Photo: AP Photo file)

A joint review concluded last month the Drug Enforcement Administration mishandled an internal probe of civilian shootings during its 2012 “Operation Anvil” in Honduras.

The Office of Inspectors General for both the State Department and Department of Justice said the agency’s “significantly flawed” examination of the May 11, 2012 incident, and two others that same year, proved to be little more than “paper exercises” to quell public concern.

The joint probe comes five years after Honduran law enforcement shot and killed four civilians and wounded four others aboard a water taxi on the Patuca River, claiming drug traffickers fired first in an attempt to recover cocaine seized during a joint U.S.-Honduran raid earlier that day.

The raid was one of many conducted during the DEA’s “Operation Anvil,” a joint mission with Honduran law enforcement to intercept drugs smuggled on planes.

“Our review found no evidence to corroborate these assertions,” said Michael Horowitz, DOJ inspector general, in a May 24 transcript of the review’s public release. “We identified no evidence that anyone in the passenger boat fired first. In fact, we found that the evidence, which was available to the DEA at the time, raises serious questions about whether there was any gunfire from the passenger boat.”

During its review of the May 11 incident, the DEA maintained drug traffickers aboard the taxi opened fire on the canoe-like boat, called a pipante, manned by a DEA agent and two Honduran officers. The Honduran officers fired back, striking two women and a 14-year-old boy, among others.

Surveillance footage captured by a U.S. Customs and Border Protection helicopter, however, shows Honduran law enforcement shooting at the passengers, including some who had jumped into the river to escape the gunfire. A DEA official on the helicopter ordered a Honduran gunner to open fire on the boat, too, according to the inspector general’s review.

“Even as information became available to DEA that conflicted with its initial reporting, including that the passenger boat may have been a water taxi carrying passengers on an overnight trip, DEA officials remained steadfast – with little credible corroborating evidence – that any individuals shot by the Hondurans were drug traffickers who were attempting to retrieve the cocaine from the pipante,” the report states.

DEA officials at first resisted investigating the incident because no federal agents opened fire, but later caved after a Honduran police report blamed the agency for confusing cargo on the passenger boat for “bales of drugs,” according to the inspector general’s review. Their subsequent investigation included no interviews with witnesses in law enforcement or from the passenger boat or the nearby village.

“DEA officials should have taken more seriously the allegations that the operation resulted in injuries and deaths of innocent civilians and should have ensured a thorough investigation of the incident,” the report states. “Had they done so, we believe DEA officials would have learned that their personnel did, in fact, exercise deadly force when at least one of them specifically directed a Honduran door gunner on a helicopter to fire his machine gun at the passenger boat. They may have also learned other facts relevant to assessing the allegations of local residents regarding the forcefulness of law enforcement conduct in the village.”

Democratic Sen. Patrick Leahy, of Vermont, said the report stands as “nothing less than a wholesale indictment of the DEA and Honduran police.”

“DEA, Honduran, and State Department officials provided Congress with incomplete, inaccurate and misleading information in order to perpetuate a self-serving narrative,” he said. “This raises serious questions whether these cases are isolated incidents.”

The joint review tasked the DEA with implementing eight recommendations to combat its poor planning and failure to understand and communicate deadly force policies with Honduran officials.

“DEA acknowledges that its pre-missions preparation was not as thorough as it should have been and that the subsequent investigation lacked the depth and scope necessary to fully assess what transpired that night,” Mary B. Schaefer, the agency’s chief compliance officer, told Telesur last month.