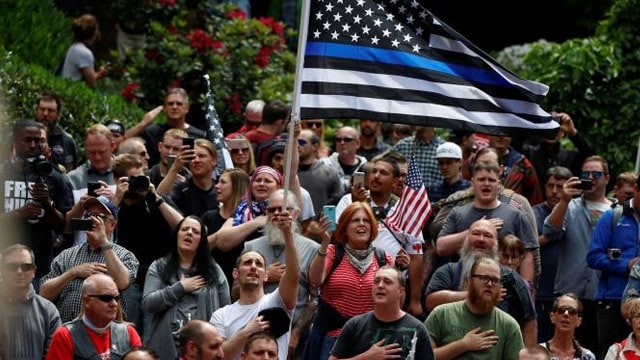 Members of the armed civilian group known as the Oath Keepers provided security Sunday for a free-speech, pro-Donald Trump rally in Portland.

Police say members of the anti-fascist group started hurling bricks at officers. That prompted police to deploy flash-bang grenades and pepper balls to disperse the crowds. Those gathered at the free speech rally, and a group of counter-protestors were not involved in those clashes, police say.

In all, 14 people were arrested at Sunday’s protests. No one was injured.

The demonstrations came less than two weeks after a man stabbed two men to death on a light rail train in Portland. Police say Jeremy Joseph Christian, 35, was directing an anti-Muslim tirade at two women. Three men stood up for them, and that’s when Christian attacked the men with a knife, police say.

Portland Mayor Ted Wheeler had implored federal authorities to rescind a permit for the free speech rally, saying he didn’t want to fan the flames of heightened tensions.

“Our city is in mourning, our community’s anger is real, and the timing and subject of these events can only exacerbate an already difficult situation,” wrote Wheeler in a post on Facebook.

On the Oath Keepers website, founder Stewart Rhodes asked members to join him at Sunday’s event.

“We will be ready, willing, and able to effectively defend the rights of all present if there is any failure of the police to do so,” wrote Rhodes. “We DO NOT expect that, but we are always prepared for anything, as is our duty.”

In a postscript, Rhodes noted that some Oath Keepers chapter leaders in Oregon “got cold feet.”

“Apparently they have given up on Portland and think it is OK to consider Portland a ‘no-go’ zone for security operations to protect life and liberty (free speech),” wrote Rhodes. “I strongly disagree. Just like in Berkeley, CA, there can be no such thing as a Marxist dominated ‘NO free speech’ zone in an entire city inside the U.S, akin to the Muslim extremist no-go zones in Europe, where non-Muslims dare not go on pain of death.”

It’s not clear which leaders were unwilling to provide security at Sunday’s event in Portland, but a report last month from the Southern Poverty Law Center pointed to discord among some Oath Keepers faithful in Oregon.

“We have flag rank officers and senior officers, military retired, that made the statement that they would not join the group as long as Stewart Rhodes was in charge,” said Joseph Rice, the founder of an Oath Keepers chapter in Josephine County. “Stewart is not a leader. He has no leadership ability. He self promotes.”