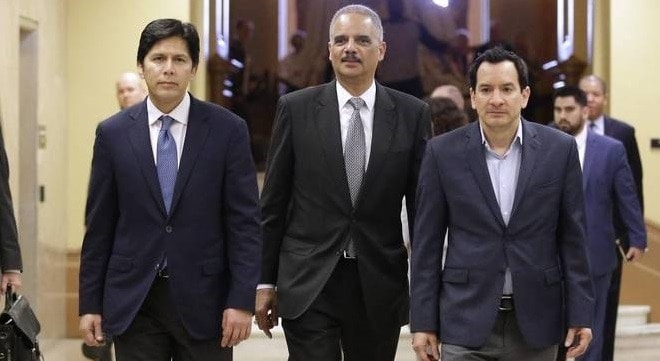 Hired in January by the California Legislature as a legal shield against the Trump administration, lawmakers are not renewing Holder’s contract.

As reported by The Sacramento Bee, the California Assembly will end it’s $25,000-a-month relationship with Washington D.C.-based law firm of Covington and Burling, of whom former U.S. Attorney General Eric Holder is a partner. Democratic leaders caution they will reach out to the firm in the future if needed.

“We have received valuable guidance from Covington & Burling over the past four months,” said Assembly Speaker Anthony Rendon, D-Paramount. “We will continue to seek their guidance as the need arises.”

When the initial three-month contract was inked earlier this year, Rendon spoke of Holder’s firm as “an important resource as we work with the Governor and the Attorney General to protect California from the reckless overreach we expect from Donald Trump and the Republican members of Congress who have so cravenly enabled him.” In May, the contract was renewed for one further month.

However, some argue the money spent on the former Obama administration figure was a waste of public funds and the state has little to show for keeping Holder on the payroll.

For their part, Assembly Republicans tweeted out a blank list of “accomplishments on behalf of taxpayers and ordinary Californians for the $100,000 paid to Holder’s firm over the past four months.”

As the nation’s 82nd attorney general, Holder had a long history of controversial stands on smart gun technology, states’ rights, contempt of Congress citations in the Fast and Furious gun-walking scandal, and other issues.

Since leaving government office in 2015, he has returned to private practice with the same law firm he worked at before joining President Obama’s cabinet. Holder’s firm is also lending its legal expertise to the Firearms Accountability Counsel Taskforce, a group of high-powered firms with plans to commit tens of millions of dollars in pro bono legal services for gun control efforts.

While retained by the California Assembly this year, Holder was selected by the allied gun control groups Americans for Responsible Solutions and the Law Center to Prevent Gun Violence to be the recipient of their 2017 Courageous Leadership Award.

“Holder is a strong supporter of community-based solutions to the epidemic of shootings that afflicts the United States and an outspoken advocate for reforming our nation’s gun laws,” said Robyn Thomas, executive director of the Law Center to Prevent Gun Violence, in a statement last week.