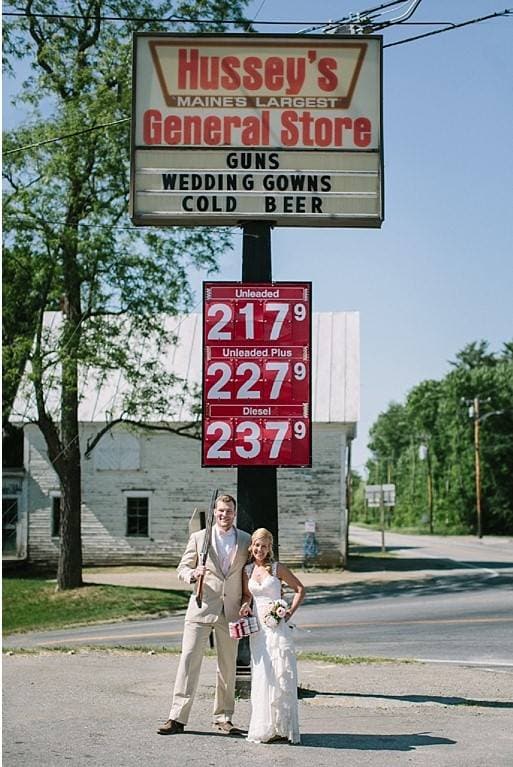 Kristen Ballantyne and her husband on their wedding day in front of Hussey’s General Store. Ballantyne’s great-grandparents opened the store in 1923 as a “mishmash of things.” Formal wear was added in the 1950s. (Photo: Courtney Elizabeth/Facebook)

Maine’s largest general store advertises “guns, wedding gowns and cold beer” on its front sign every day, attracting brides from as far away as Hawaii and Alaska.

Hussey’s General Store in Windsor — a southeastern town of just 2,500 residents about two hours from the coast — opened more than 90 years ago as a “mishmash of basic things” for locals unable to make the 60-plus mile trek to Portland.

“And then — as it began to get more and more popular — they just kept adding on,” Kristen Ballantyne told Racked in a profile of her great-grandparent’s famous shop published Tuesday. “There was no other place in Central Maine, really.”

Ballantyne manages the clothing department at Hussey’s and said the sign’s wording hasn’t changed much since the 1970s.

“Obviously, we’ve grown over the years, but we haven’t really lost that personal touch,” she said. “It’s like a social hub for a lot of people.”

The store offers a selection of hundreds of handguns, rifles and shotguns. A 15-page list can be viewed here.

Brides stop in the store as a rite of passage, said Jenna Corey, a North Carolina teacher who grew up in Windsor and returned to the store last year to buy her gown.

Another former resident, Nicole White, and her fiancé, drove from Boston to peruse the wedding gown and gun offerings.

“I think sometimes people get caught up in the joke behind the sign, but it actually is a great place to get a dress,” she said.

And, according White’s fiancé, a great place for guns, too.