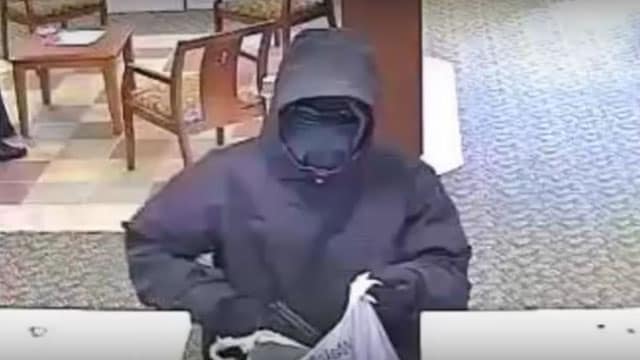 Albert Taderera wore a similar disguise in most of the robberies and some witnesses reported seeing him flee in a black BMW, which ultimately led authorities to him. (Photo: Justice Department)

A man accused of robbing more than a dozen Boston-area banks was indicted by a federal grand jury on charges stemming from one of the robberies, the Justice Department announced Thursday.

The grand jury charged Albert Taderera, 36, with the Oct. 7, 2016, robbery of the TD Bank in Wayland, Massachusetts, in which Taderera allegedly walked away with around $8,100.

According to the indictment, Taderera committed the robbery “by force and violence, and by intimidation” and “did assault and put in jeopardy the life of another person by the use of a dangerous weapon.”

Taderera, who was dubbed the “Incognito Bandit,” was arrested in March on suspicion of a total of 16 bank robberies, although he has, thus far, only been indicted on the one. He was apprehended by U.S. Customs and Border Protection officers at Dulles International Airport in Virginia as he attempted to board a plane bound for South Africa.

His arrest came shortly after the last of the 16 robberies, which spanned from February 2015 to March 2017, and was the result of watchful witnesses, thorough investigations and the quick actions of authorities.

Due to similar details in each case, authorities came to believe that the same suspect was responsible for all 16 robberies.

All 16 robberies occurred at banks located in similar suburban settings, at freestanding buildings and near areas which were wooded or otherwise had heavy foliage. Witnesses said the suspect fled into these wooded areas following the robberies and some reported seeing the suspect leave in a black BMW.

On March 16, about a week before Taderera was arrested, officers with the Concord Police Department observed a black BMW outside of a local bank. The driver – Taderera – matched the description of the suspect previously given by witnesses. Officers also realized the registration for the BMW had been revoked, so they had the vehicle towed and impounded.

About a week later, Taderera called the tow company and inquired into the whereabouts of his BMW, to which he was informed it was in the possession of the police department, but Taderera did not attempt to get his car. However, the following day, the Federal Bureau of Investigation was alerted when Taderera purchased a plane ticket to Ethiopia, which was rerouted to South Africa later that same day.

Authorities moved swiftly and apprehended Taderera before he boarded the plane.

If convicted, Taderera could face up to 25 years in prison, followed by five years of supervised released, and a fine of up to $250,000.