Suppressor reform bills on the move in NY, Rhode Island 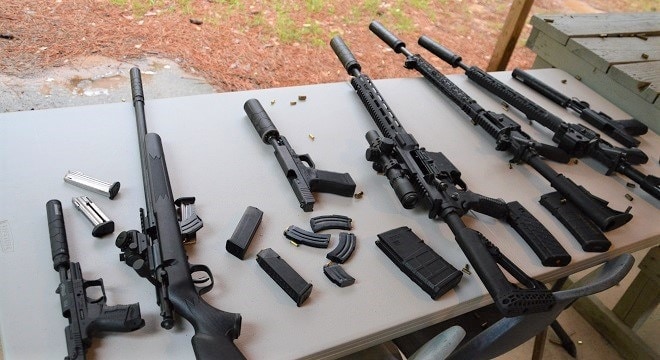 Currently, eight states ban National Firearms Act-compliant suppressors from civilian ownership and 10 prohibit their use in hunting, though this could soon change. (Photo: Chris Eger/Guns.com)

Legislation is underway to legalize suppressor ownership in two of the eight states that currently restrict their possession.

In both New York and Rhode Island bills aimed at removing the prohibition on firearm silencers and allow for their use in hunting are scheduled for hearings this week in their respective state senates.

In the Empire State, Robert G. Ortt, a Republican state senator from the Niagara Falls area, is arguing the use of the devices would help as a form of hearing protection.

“An individual at a gun range who is continuously exposing themselves to the repeated firing of a weapon could be doing extreme amounts of damage to their hearing,” said Ortt in a note to lawmakers. “Likewise, an individual who is hunting and is exposed to the loud firing of their or someone else’s weapon risks hearing loss as well.”

Ortt’s bill, S.1209A, would allow the possession of suppressors and clarifies they can be used in hunting.

Currently, 8 states ban the use or possession of federally regulated suppressors except for law enforcement or licensed dealers. State legalization of suppressors would be increasingly important if pending legislation to reclassify the devices to remove some of the federal restrictions passes.

The New York measure has two co-sponsors, both Republicans and is scheduled to be heard by the Senate Environmental Conservation Committee on Wednesday.

Backed by five Democrats, Rhode Island’s Senate Bill 399 would legalize the possession and ownership of suppressors on firearms with an overall length of more than 17 inches and allow for their use in hunting on rifles or shotguns in the Ocean State. The measure is on the agenda for the Rhode Island Senate Judiciary Committee this week.

Elsewhere, bills to reform state laws on suppressors have been introduced this year in Connecticut, Hawaii, Illinois and Massachusetts, with varying levels of success.

Last month, Tennessee removed much of its state-level restrictions on possession, manufacture, transport, repair or sale of the devices.