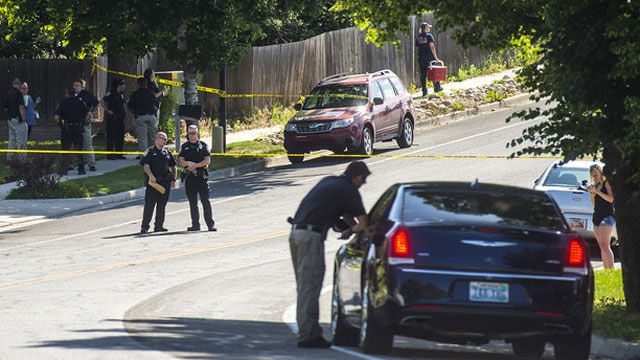 Authorities investigate after a shooting in a Salt Lake City suburb that left a mother and her son dead, and two other children injured. (Photo: KSL)

Two children were injured and a 39-year-old woman and her kindergarten son were killed before the gunman, an apparent ex-boyfriend of the victim, turned the gun on himself in Sandy, Utah, Tuesday afternoon.

The shooting rocked the typically quiet Salt Lake City suburb, but according to reports, just three days prior to the shooting, the victim, identified as Memorez Rackley, contacted the police to report harassment from the suspect, 32-year-old Jeremy Patterson, who was told by authorities not to contact Rackley again.

The shooting occurred around 3:45 p.m., about 10 minutes after Rackley had picked up her two children from school. A woman passing by apparently noticed Rackley and her children walking on the side of the road and stopped to help them, although it’s unclear what occurred in the minutes before the woman stopped.

Rackley accepted a ride from the woman, but almost immediately, Patterson drove up behind the woman’s SUV and rammed it from behind with his pickup truck, which disabled the woman’s vehicle. Patterson then got out of his truck, walked up to the SUV, and opened fire on the occupants.

Rackley, her 6- and 9-year-old sons, along with the SUV driver’s 8-year-old daughter were all shot. Patterson then turned the gun on himself.

The driver of the SUV then ran to a nearby home for help. According to the homeowner, Kathy Peterson, the woman was covered in blood and had three terrified little girls with her. Peterson said the woman was crying hysterically screaming, “He’s killing everybody.”

Rackley, her 6-year-old son, and Patterson were all pronounced dead at the scene. The 9-year-old boy and the 8-year-old girl were rushed to the hospital. Their current conditions are not known.

Sandy police Sgt. Jason Nielsen confirmed that Rackley and Patterson were recently in a romantic relationship. Nielsen also confirmed that Patterson was not the father of Rackley’s children and that Rackley was married at the time of the shooting. Nielsen would not further elaborate on Rackley’s relationships, but said she and her husband “loved each other very much.”

Jeff White, who has been a family friend for 30 years, said Rackley was an “amazing mother,” beloved by all of her family and friends and “adored by the whole community.” White said Rackley’s husband is doing as good as can be expected for someone who just lost his wife and child and has another child fighting for his life.

In a statement released Wednesday afternoon, the Rackley family said they are grateful to the good Samaritan and heartbroken by the events that took place. They asked for prayers and respect for their privacy during their time of mourning.