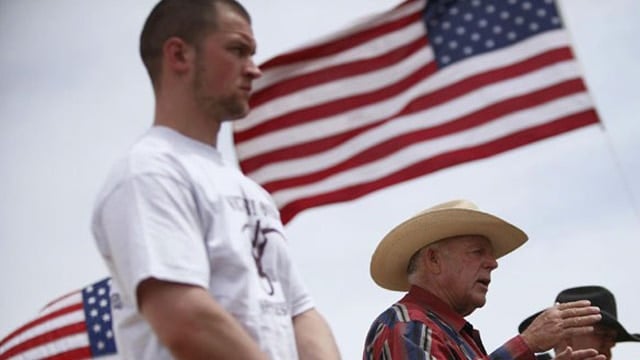 A day into his jury trial, a former bodyguard for rancher Cliven Bundy pleaded guilty Tuesday to gun charges in Washington state.

Schuyler Barbeau, 30, was representing himself in the trial, but abruptly changed course, pleading guilty to possessing a machine gun and possession of an unregistered short-barreled rifle, according to court records.

In June 2015, Barbeau told a federal informant that many public servants, including judges and police officers, had deviated from their oath of office, according to a complaint.

“Barbeau told the (informant) that it was his duty to educate public servants who were not living up to their oath and discussed ‘lynching’ those he deemed unworthy if necessary,” reads the complaint.

He told the informant that he and “other like-minded individuals” would “physically remove” a California judge overseeing a weapons charge Barbeau received there in 2014. He also said he always had a .45 caliber pistol on him, and frequently traveled with a short-barreled AR-15, body armor, and a helmet.

According to court documents, the rifle was a “black, fully automatic AR-15 5.56mm caliber assault rifle with a 10.5 inch barrel, a holographic sight, and a drop-in auto sear.”

In October 2015, Barbeau showed the rifle to the informant and asked him to find someone who wanted to buy it. He let the informant take several photos of the gun, and said he’d be willing to sell it with some accessories for $5,000, court records say.

In November, a couple weeks after the informant told Barbeau about a willing buyer, Barbeau unexpectedly dropped the rifle off at the informant’s home. The informant called the FBI, and the feds took possession of the weapon.

“On November 24, 2015, Seattle Division ATF Special Agent Claudia Grigore inspected the (short-barreled rifle) at the FBI’s office in Seattle and certified that the barrel was less than 16 inches in length, therefore requiring registration under the National Firearms Registration and Transfer Record,” the complaint says.

The ATF also verified that Barbeau had not registered the weapon.

Barbeau claimed that because he built the weapon himself, he wasn’t subject to federal restrictions. Instead of bringing that before a jury, he pleaded guilty Tuesday. He’s set to be sentenced on Sept. 1.