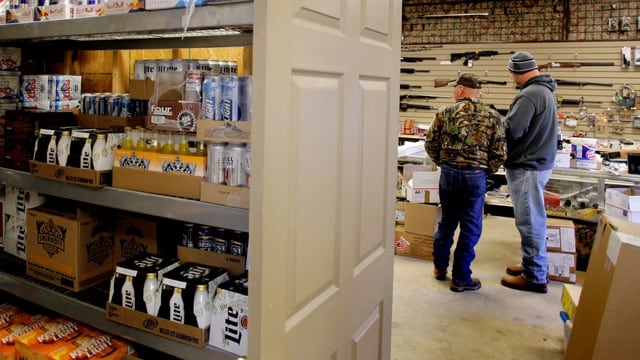 Customers shop at The Brickyard Carry Out & Drive Thru and gun store in Gouster, Ohio. (Photo: Calvin Mattheis/CalvinMattheis.com)

Ohio’s federal background check numbers — and approximate gun sales — dipped in May against the national rise over 2016.

Retailers processed 25,230 applications for potential handgun purchases and 12,924 for long guns last month, a decrease of 3 percent and 2 percent, respectively, over last year — the industry’s biggest on record.

Ohio, a regular in the top five busiest states for NICS checks every month in both categories, remains up 53 percent compared to five years ago and dipped in May once before: in 2014, the year after the Sandy Hook massacre spurred a record-breaking burst in gun sales nationwide throughout the first half of 2013.

Dean Rieck, executive director of the Buckeye Firearms Association, told Guns.com Thursday the May slump is no cause for concern.

“I think the slight drop in May 2017 is just a normal fluctuation in an otherwise upward trajectory,” he said. “The prediction was that a Trump presidency would result in a big drop in gun sales because the ‘threat’ of a Democratic win would be gone. But that has proven to be yet more fake news.”

NICS data serves as proxy for gun sales, though not every background check correlates to one gun sold. Guns.com estimates licensed gun dealers sold about 5.4 million guns through the first five months of 2017, about 395,000 behind last year.