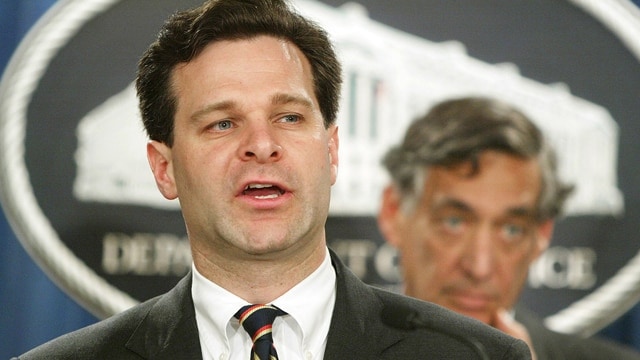 Christopher Wray worked for the Justice Department for several years beginning in 2001.

I will be nominating Christopher A. Wray, a man of impeccable credentials, to be the new Director of the FBI. Details to follow.

Currently a criminal defense lawyer in Washington, Wray has served in several roles inside the Department of Justice. Months before 9/11, Wray became the Associate Deputy Attorney General of the DOJ, according to an official announcement from the White House. He also led the Justice Department’s Criminal Division from 2003 to 2005.

“We have found our man in Chris Wray,” wrote Attorney General Jeff Sessions in a statement released Wednesday. Many Republicans agreed with Sessions.

“I don’t know the guy, but I’ve looked at his resume,” said House Speaker Paul Ryan. “He seems like to me, he’s the perfect kind of person. I thought we should have a career person take over the FBI, someone with a deep bench of experience. He certainly seems to fit that bill.”

“The president deserves extraordinary credit for going through a deliberative process and coming to the conclusion of picking, not a politician, but a law enforcement professional who has the respect on both sides of the aisle,” said New Jersey Gov. Chris Christie.

On the other side of the aisle, some Democrats expressed a need for scrutiny.

“In light of the president’s constant efforts to block the truth, the nomination of Christopher Wray should be subject to the utmost scrutiny,” said Rep. Nancy Pelosi, according to the New York Times.

“Christopher Wray’s firm’s legal work for the Trump family, his history of partisan activity, as well as his history of defending Trump’s transition director during a criminal scandal makes us question his ability to lead the FBI with the independence, even-handed judgment, and commitment to the rule of law that the agency deserves,” said Faiz Shakir, the national political director of the American Civil Liberties Union. Shakir was referring to Gov. Christie and the Bridgegate case.

People who have worked with Wray say he wouldn’t hesitate to stand up to the president. He’ll have to be confirmed by the Senate before serving a 10-year term.