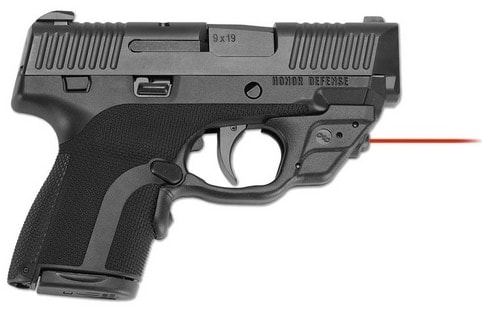 Crimson Trace announced an expansion of its network of firearm brands, adding Honor Defense to its lineup of supported brands.

The Lasergrip is designed to match the contour and design of the Honor Guard pistol, making for a seamless pairing of the two devices. Outfitted with Crimson Trace’s patented Instinctive Action, the laser activates when the gun is held in a natural firing grip.

The LaserGuard model features a polymer houses with rubber overmold activation pad and one 1/3N lithium battery or two 357 silver oxide batteries. Battery life, according to the company, is over the four-hour mark.

The Lasergrip requires no gunsmithing to install and is fully adjustable for windage and elevation.

The LaserGuard Lasergrip for the Honor Guard pistol by Honor Defense is currently shipping with an MSRP of $229.