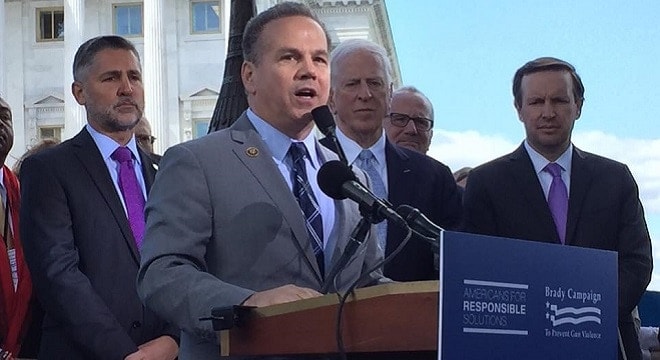 The measure, termed the Disarm Hate Act, comes near the anniversaries of the mass killings at the Pulse Nightclub in Orlando and Emanuel AME Church in Charleston and would ban the sale of firearms to those convicted of vandalizing a place of worship or assaulting someone based on their perceived race, religion, gender, sexual orientation, gender identity, or disability.

“If you commit a hate crime, you shouldn’t be allowed to own a gun. Period,” said sponsor, U.S. Rep. David N. Cicilline, a Rhode Island Democrat. “There is a clear link between these horrific hate crimes and gun violence. We know that those who commit hate crimes become increasingly violent as time goes on. No American family should have to suffer because of this loophole.”

Introduced Thursday as H.R.2841 in the House with 18 co-sponsors, and S.1324 in the Senate by Pennsylvania Democrat Bob Casey with 10 co-sponsors, the legislation would make convictions of misdemeanor hate crimes under state, federal or tribal laws sufficient to deem an individual a prohibited firearms possessor in the eyes of the federal government. The bill goes on to define such an offense as any that came about because of a victim’s race, color, religion, national origin, gender, sexual orientation, gender identity or disability.

The proposal has the early support of several anti-gun groups including Sandy Hook Promise, the Brady Campaign, Everytown and Moms Demand Action.

“A year ago, a man filled with hate was able to get his hands on a gun and unleash tragic violence in Orlando’s Pulse nightclub,” said Brady President Dan Gross. “We have to do better than the world that made it so easy for him, and so many other dangerous people, to get guns.