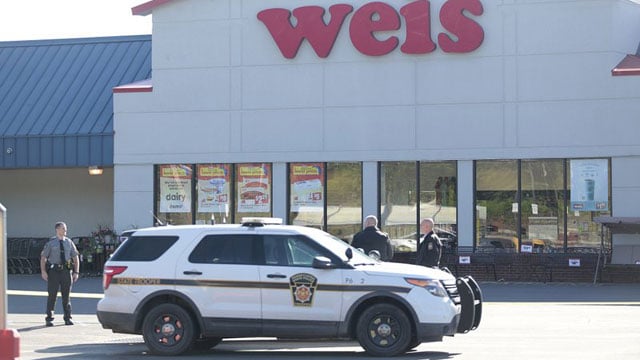 Police say the gunman used pallets and other items to barricade the doors of the grocery store before killing his co-workers. (Photo: Associated Press)

A workplace shooting at a Tunkhannock, Pennsylvania, supermarket early Thursday morning left four people dead, including the gunman, and a typically quiet community in shock.

The deceased victims were identified as Victoria Brong, 25, of Factoryville; Brian Hayes, 47, of Springville; and Terry Sterling, 63, of South Montrose. The gunman, who apparently killed himself at the end of his deadly rampage, was identified as Randy Stair, 24, of Dallas, Pennsylvania. All were employees at the Weis Market.

Authorities say Stair came to work at 11 p.m. Wednesday, which was his usual shift. Wyoming County District Attorney Jeff Mitchell said at 12:37 a.m., Stair sent a text message to his mother, who was asleep at the time. It was essentially a suicide note.

Then, around 1 a.m., Stair blocked all the entrances and exits to the building, including a door which he blocked with his car, retrieved a duffel bag containing his weapons, then systematically gunned down his co-workers one by one. According to reports from The Associated Press, one victim was able to escape unharmed and call 911.

Stair also added to a media sharing website a photo of what appears to be him standing in the bathroom of the grocery store. The media file was named “June 07, 2017 (210am).jpg.”

The supermarket was closed at the time of the shooting and police estimate that nearly 60 shots were fired inside.

A series of chilling social media posts believed to be created by Stair depicted a deeply disturbed and depressed individual who “had enough of this putrid planet” and intended to leave his “mark.” The posts included a 37-minute video detailing his plans to carry out the supermarket massacre. The video was uploaded on May 11. The posts also included photos of him with the guns he apparently used in the shooting. Stair also praised mass shooters, from Columbine to Sand Hook and others.

In a statement released by Weis Market, the company said they are deeply saddened by the events and that the safety of the associates, customer, and community is their top priority.

“I’m thinking this place is safe up here. We’re in the middle of the country, it’s a wonderful town,” Weis employee Rick Mehall told reporters. “People were calling me on my way to work, they were asking me what’s going on. I had no clue.”

Mitchell called the event a sad and tragic day for the county and asked for prayers for the victims, their friends and families, and the victim who escaped but still witnessed the “horrific event.”