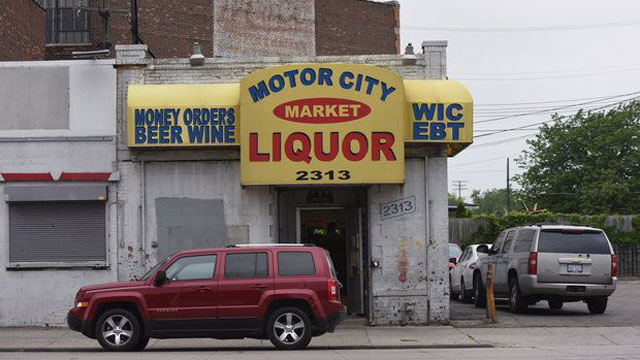 An attempted robbery outside of a Detroit liquor store Sunday night ended in an exchange of gunfire that left the suspect dead and the victim – an off-duty Detroit police officer – fighting for his life.

Detroit Police Chief James Craig said in a media briefing that part of the crime was captured on surveillance video.

As the officer left the store around 11 p.m., he was approached by the suspect, who was armed with a gun. Craig said the suspect ran toward the officer with his arm extended and an exchange of gunfire followed.

Both the suspect and the officer fell to the ground, and as they lay there, another person approached them both, then took the first suspect’s gun, as well as the officer’s department-issued gun and cell phone.

Craig said the way the person acted toward the suspect led him to believe they knew each other.

The first suspect, who was later identified as 21-year-old Juwan Lumpkin, was pronounced dead at the scene. The 27-year-old officer, who has been with the department for about a year but has not been publicly identified, was shot in the abdomen and foot.

The officer was initially listed in critical condition and underwent emergency surgery. However, Craig said he spoke with the officer after surgery and he was smiling, optimistic and talking of returning to duty.

Authorities later apprehended Keevon Deewon Robinson, 19, who is accused of being the “lookout” during the robbery. According to a news release from Wayne County Prosecutor Kym Worthy, Robinson was charged with armed robbery and conspiracy to commit armed robbery.

However, Craig said Robinson is not believed to be the same person who took the guns from the crime scene. Authorities are still searching for that individual, along with the officer’s weapon and cell phone.