How legislation forced the .450 Bushmaster into the spotlight 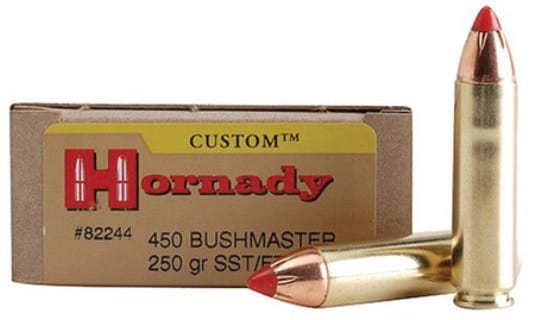 Hornady is one of two major ammunition makers that supply the .450 Bushmaster. (Photo: Hornady)

The .450 Bushmaster caliber quietly crept back into the limelight this year, its resurgence linked to legislation from the Midwest.

How did updated hunting regulations breathe new life into this chambering?

The Thumper round, as it is affectionately known, was created by Col. Jeff Cooper. Cooper, notorious for his disdain for the .223 caliber AR-15 platforms, envisioned a cartridge for big game that could handle shots out to 250 yards.

Bushmaster asked the Hornady team to modify the original concept to integrate a .250 grain super shock tip into the design. The modification forced the ammo maker to shorten the cartridge case and thus the .450 Bushmaster round was born.

Today, only two major ammunition manufacturers serve the round to consumers — Hornady with the FTX and FTX Black lines and Remington’s Accutip series.

Capable of big bore performance, the .450 caliber can down feral hogs, deer, elk and in some cases even bears. Hornady’s 250 grain FTX round, for example, features a much higher ballistic coefficient, touting .210 at a velocity of 2,200 feet-per-second.

Though the round has existed in shooting circles, it’s seen a resurgence in recent times in response to Midwestern hunting legislation. In states like Michigan, hunters are restricted in the types of cartridges that may be used while hunting with rifles. Shooters are limited to using straight-walled cases between 1.16 inches and 1.8 inches and of .35 caliber or larger.

Necessity, as they say, is the mother of invention.

While the Midwestern states didn’t force creation on the .450 round, legislation, as it often does, pushed innovation on that platform.

Though Remington has supplied .450 fans with the chambering option on its semi-automatic R-15 since 2010, Ruger recently waded into the .450 Bushmaster pool offering a rifle of its own chambered in the round. Launched this year, the manufacturing powerhouse furnished two bolt-action configurations — The Ruger American Rifle Ranch and the Ruger Gunsite Scout.

Christopher Killoy, CEO of Ruger, told investors at the company’s annual meeting held in May that the round caught the gun maker off guard with its amassing popularity.

“Very cool looking very popular new caliber in Midwestern states that have laws relating to straight wall cartridges for their deer hunting season,” Killoy said. “So the .450 Bushmaster cartridge really caught us by surprise — pleasant surprise and we’ve got that not only in scout rifle, but several of our other more traditional hunting rifles in the American rifle family.”

With Ruger now on board, and with the caliber demonstrating solid numbers for the company, the .450 Bushmaster might have just earned its keep in the industry despite limited ammo availability. So long as legislation remains on par, the .450 Bushmaster will continue its rise in the ranks of Midwestern hunters.