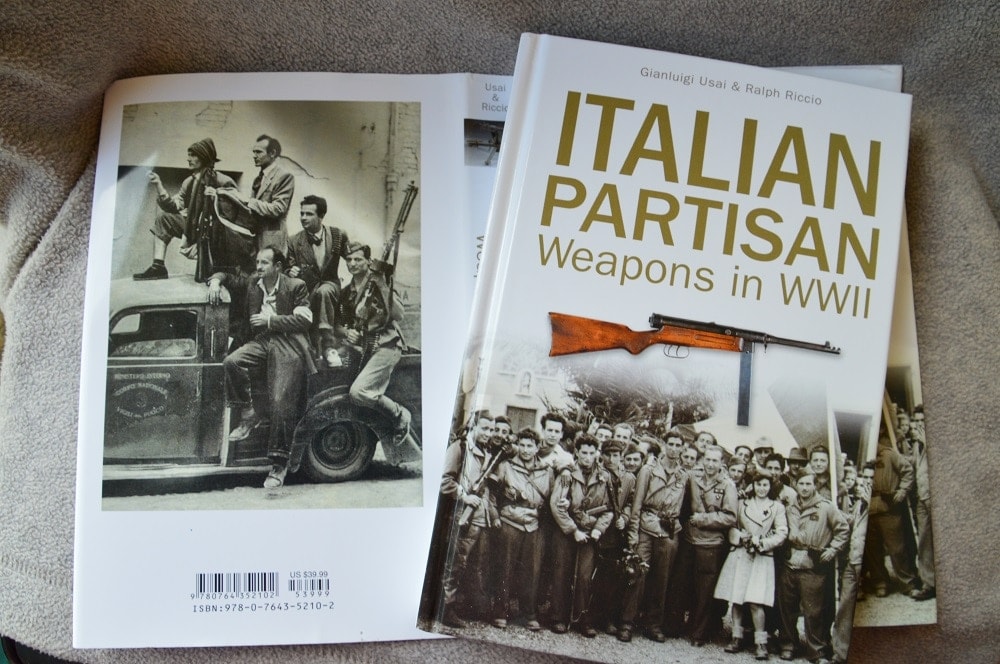 Usai’s Italian Partisan Weapons in WWII was written in Italian from original sources and translated by Riccio, shedding a fresh light on a subject not often addressed on this side of the pond. (Photos: Chris Eger/Guns.com)

While Italy started the war as a member of the Axis, after Mussolini was deposed in 1943, partisan groups sprung up across the country to fight to Germans. These are their arms.

The original face of fascism in post-1918 Europe, Italian dictator Benito “Il Duce” Mussolini became Italy’s prime minister in 1922 and transformed the nation into a totalitarian state which soon became embroiled in wars in Ethiopia and Spain before the ruin that was World War II. By September 1943, with the Allies closing in, Mussolini was canned on the orders of the King and within days the Italians officially switched sides. The problem was that the Germans still occupied Rome and everything north to Austria, which led to resistance groups springing up behind the lines almost immediately in an effort to take their country back.

As Mussolini was liberated from house arrest by the Germans, the north became the puppet Italian Social Republic, loyal to the Axis, with southern Italy fighting on the side of the Allies.

By the end of the war in 1945, nearly 250,000 Italians of all stripes and political affiliations were part of what was known collectively as the Resistenza italiana, the underground resistance brigades, battalions and partisan companies fighting to liberate their country from the streets of Rome to the Alps.

And they had a myriad of guns, as addressed by Gianluigi Usai in the logically named Italian Partisan Weapons in WWII.

While some Italian army and police (Carabinieri) units deserted en masse and took their issued firearms with them, other resistance groups started from scratch with private arms and had to equip themselves as best they could with the captured weapons of their foes. In both cases, Allied munitions were dropped behind the lines to help even the odds. This, in turn, meant some groups were equipped with dozens of rifles and pistols in varying calibers.

Covering 288 pages, Usai’s work, translated by retired U.S. Army officer Ralph Riccio, uses hundreds of period images, original research, resistance group documents and other sources to identify no less than 24 different handgun models, 15 types of bolt-action and semi-automatic infantry rifles, 18 submachine guns, and 26 light and heavy machine guns used by the partisans in their war of liberation. In some group images in the book, almost each partisan is armed with a different weapon. 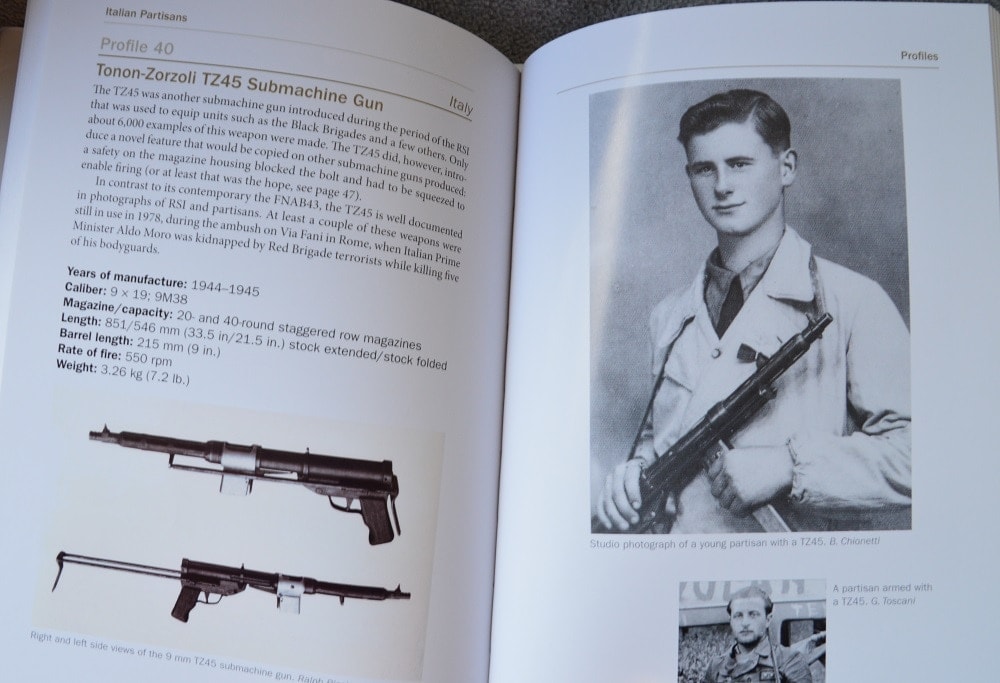 You do know about the Tonon-Zorzoli Giandoso TZ45 submachine gun, yes?

Each gun is profiled, with specs and information on the weapon itself, and several images, including in the hands of Italian streetfighters. While some are no-brainers, such as Italian-made Vetterli rifles, Beretta pistols, and Breda machine guns, there are also such documented oddities for the area as the Soviet DP28, Finnish Suomi, and Argentine Ballester Molina. 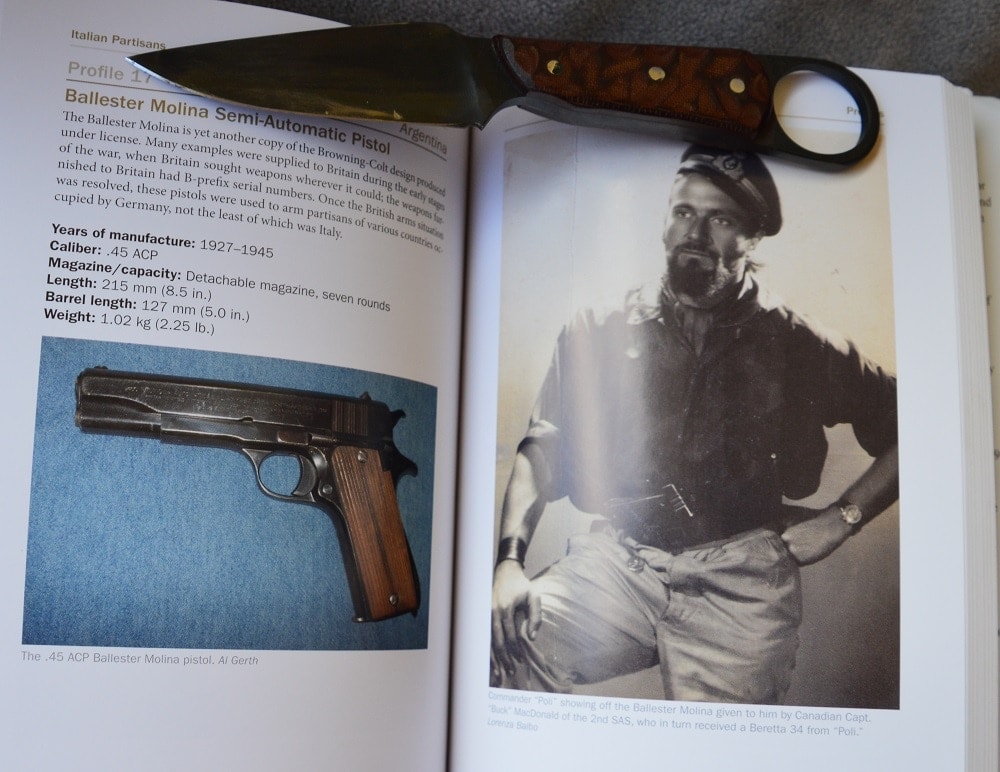 Ballesters were present in Italy in WWII due to a British contract to arm special operations troops, who often passed the guns on as needed.

It should be noted that, in the end, “Il Duce” reportedly lost his life to a partisan armed with a captured French MAS 38 submachine gun.

In addition to the profiles, the book dedicates more than 100 pages to the historical background of the resistance groups and their leaders, providing dozens of painstakingly translated documents covering training and issuance of arms and munitions to the insurgent groups. 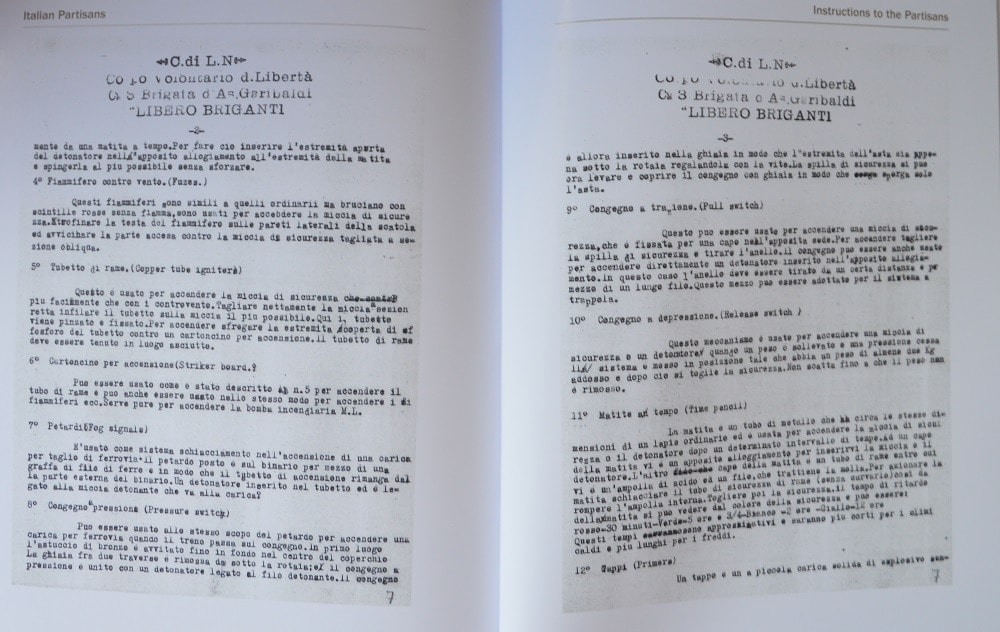 Instructions from the 8th Garibaldi Assault Brigade to members on how to use Allied-supplied Bickford safety fuze, Cordex and detonators, translation on the following page.

A special chapter covers the efforts made since 1945 by the post-war government to get these arms back from hidden caches and stockpiles in hillside mineshafts, false walls, and basements. It seems, as noted by Usai, “non si butta via niente” (nothing gets thrown away) when it comes to working firearms, with vintage STENs, grenades, and UD42 sub guns popping up as late as 2014.

In all, if you are curious about the history of small arms used in the ETO during WWII, or more obliquely about Italian military history, or resistance operations behind German lines in general, this is a must for your bookshelf.

Italian Partisan Weapons in WWII is widely available through Amazon, Barnes and Nobles, and elsewhere.