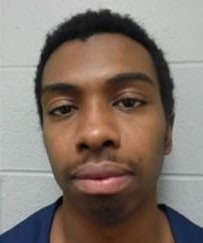 A Detroit man was sentenced to 15 months in prison Friday for threatening to blow up the funeral procession of a murdered Detroit Police Department sergeant.

According to a Justice Department news release, 21-year-old Deshawn Maurice Lanton had previously pleaded guilty to the charges of false information and hoaxes for his threats against those attending the funeral of Detroit Police Department Sgt. Kenneth Steil.

Court records specify that Lanton wrote a threatening message on the Facebook live stream of the slain officer’s funeral.

“Maybe I should drop a bomb on tha building to get rid of the rest of y’all,” Lanton wrote, as hundreds of officers marched into St. Joan of Arc Church in St. Clair Shores.

The officers marched in honor of Steil, who was murdered in the line of duty in September 2016. Steil’s widow and children were also present at the funeral.

Other people who were watching the Facebook live stream saw Lanton’s message and contacted the police.

Lanton has an extensive rap sheet, with several violent crimes and other felony convictions.

The Federal Bureau of Investigation and the Detroit Police Department investigated the case.