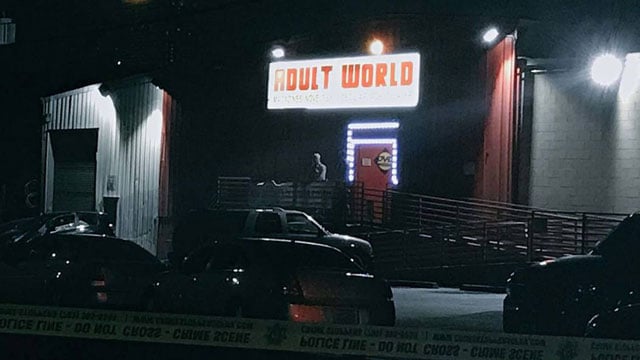 The suspect, who is from Hawaii, was previously banned from the business. (Photo: Las Vegas Review-Journal)

An altercation inside a Las Vegas adult store Friday evening left a security guard badly beaten and his attacker dead.

Las Vegas Metropolitan Police Department homicide Lt. Dan McGrath said the suspect was not trying to rob the store, but that the security guard appeared to have acted in self-defense when he opened fire, according to reports from CBS Las Vegas Now.

The incident unfolded around 7 p.m. when the suspect, later identified as 31-year-old Starsky Tautava, entered Adult World, where he had previously been kicked out in the past and asked not to return.

The security guard, who works at the establishment part-time, recognized Tautava and again asked him to leave several times. But Tautava, who was described as a very large man who stands over 6 feet tall and weighs about 250 pounds, responded by attacking the security guard. The assault lasted several minutes, and the security guard was repeatedly being struck in the head, the Las Vegas Review-Journal reported.

However, during the attack, the security guard pulled out his weapon and shot Tautava a single time in the chest. Tautava, who lives in Hawaii, was rushed to a local hospital where he was pronounced dead. Authorities said the security guard, who was not publicly identified but said to be in his 50s or 60s, was left “badly beaten.”

McGrath confirmed the security guard has a concealed weapons license and was legally armed. No charges are expected to be filed against him.

The investigation is ongoing and the security guard, as well as the Uber driver, who was waiting outside in his vehicle when the shooting occurred, have fully cooperated with authorities.

Two customers were in the store at the time of the shooting, but neither were injured.