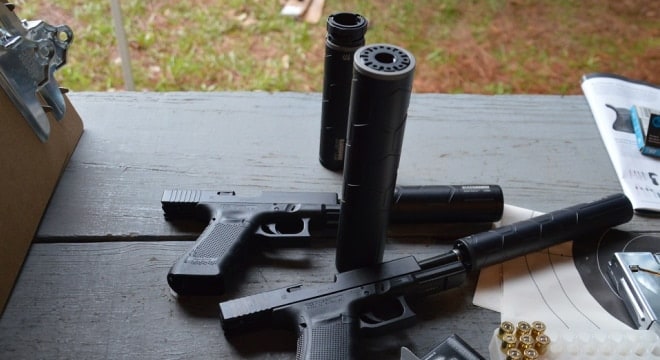 A popular bill to remove suppressors from NFA regulation may be blended into an even more popular sportsmen’s package (Photo: Chris Eger/Guns.com)

The sponsor of a bill to drop suppressors from National Firearms Act regulation is looking to fold an improved version of the proposal into a larger sportsmen’s package.

South Carolina Republican U.S. Rep. Jeff Duncan currently has 148 co-sponsors on his Hearing Protection Act introduced in January, but on Wednesday proposed at a legislative hearing of the House Natural Resource Subcommittee to add it into his larger “Sportsmen Heritage and Recreational Enhancement Act” or “SHARE Act.”

The SHARE Act, an omnibus package of measures to safeguard and expand hunting and fishing rights and practices across public land, has been popular with lawmakers in recent years but, while a similar proposal passed both chambers in bipartisan votes last session, was never sent to President Obama by the lame duck Congress.

Duncan’s new and improved version, a 74-page bill, includes many of the widely supported pro-hunting and pro-sportsman provisions of the past and blends them with the language from the suppressor deregulation bill.

In addition to removing silencers and suppressors from NFA requirements that include a $200 tax stamp, the proposal would mandate the more than 1.3 million already registered be deleted from the Bureau of Alcohol, Tobacco, Firearms and Explosives’ records within 365 days of the bill becoming law. Further, while states would not be required to allow their sale or possession, they would be barred from establishing their own potentially prohibitive taxes or registration requirements on legal devices.

The proposal includes a provision to refund the $200 transfer tax to applicants who purchased a suppressor after Oct. 22, 2015, though makers of the devices would be liable for a 10 percent Pittman-Robertson excise tax, as they are currently on all modern firearms.

Duncan, who last week hosted an informational shoot at the U.S. Capitol to educate fellow lawmakers on suppressors, told Politico the move to add the Hearing Protection Act to the hunting package makes sense.

“By changing the outdated regulation of suppressors to an instant background check, just like the requirements to purchase a typical firearm, I hope the sportsmen and women in the United States will have greater access to noise reduction technology as they carry the hunting and recreational shooting tradition to future generations,” said Duncan.

Other additions Duncan has combined into the draft of the new SHARE Act are the elimination of the ATF’s authority to reclassify popular rifle ammunition as “armor piercing,” rolling back restrictions on the importation of certain ammunition from overseas, limiting how regulators classify some shotguns, shells and rifles as “destructive devices” under the NFA, and broadening temporary interstate transfers of firearms without having to meet a sporting clause.

Gun control groups slam what they term the “sneak” by Duncan to insert the Hearing Protection Act into broader legislation. In a statement issued by Everytown and Moms Demand Action, the groups argue the bill will “enable dangerous people to buy silencers with no background check whatsoever – making law enforcement jobs more difficult, and potentially making mass shootings even more deadly.”