Man exonerated for 1992 Michigan murder: 'They switched the bullets on me' 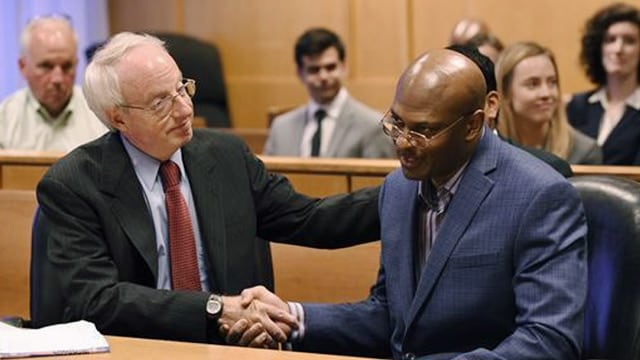 Claiming Detroit police intentionally framed him by switching bullets, a Michigan man was exonerated earlier this month after spending 25 years in prison for murder.

Desmond Ricks, 51, was released from prison in late May after a judge ordered he get a new trial, according to the Detroit News. Less than a week later, prosecutors agreed to drop murder charges against him.

Ricks had been serving time for the 1992 murder of Gerry Bennett outside a restaurant in Detroit. An ex-convict at the time, Ricks was with Bennett when he was killed, but told the Associated Press earlier this year he was “in the wrong place at the wrong time.”

“They switched the bullets on me,” he said.

Ricks said when gunfire erupted at the burger joint in 1992, he ran away. Days later, police arrested him and confiscated his mother’s Rossi .38 caliber revolver. At trial, detectives claimed the bullets they presented were from that gun, and were responsible for the death of Bennett. Ricks was convicted and had been serving a 32-62 year sentence.

In 2009, Ricks found a name he recognized in the back of a law journal: David Townshend. At Ricks’ trial, Townshend testified before the jury that bullets given to him by police matched Mary Ricks’ revolver. Ricks reached out to Townshend, who remembered the case, and visited him in prison.

In 2015, with the help of the University of Michigan law school’s Innocence Clinic, prosecutors released photos of bullets and fragments. Townshend said those bullets were “severely mutilated and extensively damaged.” They were not the same bullets he inspected for Ricks’ trial, he insisted.

“The two fired evidence bullets I received … appeared to be in near pristine condition,” Townshend said in an affidavit. “The … bullets failed to reveal the presence of trace evidence, e.g. blood, bone, hair, tissue, fabric or deformation that would be associated with bullets that had been fired into and removed from the skull and/or the body of a homicide victim.”

But prosecutors questioned the credibility of Townshend’s memory.

“Since Townshend has examined countless spent bullets during his 47 years as a firearms examiner, it is possible that Townshend is merely mistaken about what he remembers,” assistant prosecutor Jonathan Mycek said in a court filing.

Still, other facts pointed to Ricks’ innocence. A restaurant employee recanted the testimony she gave at his trial. She said he couldn’t have done it because he was sitting in a car when Bennett was shot. She also said a prosecutor bullied her and she was afraid of police back in 1992.

On top of that, Ricks’ conviction relied on evidence processed at the Detroit Crime Lab, which shuttered in 2008 after a state audit found rampant errors in ballistics testing. In a state police report, it was revealed that one of the bullets taken from Bennett’s body was not fired from Ricks’ mother’s pistol. And in an affidavit filed by Ricks’ team, Oakland County Medical Examiner Dr. Ljubisa Dragovic said the bullets taken from Bennett’s body were “likely much smaller” than the .38 caliber bullets used to implicate Ricks in the murder.

“I don’t see how it can be anything but intentional,” said David Moran, director of the Innocence Clinic. “That level of conduct is very serious … if it happened in this case, it could have happened many other times.”

“If there’s an allegation of wrongdoing by past or current officers, we will investigate it and take the appropriate action,” Craig said. “And if there is wrongdoing, we will hold those individuals accountable.”

As for Ricks, he’s eligible for $1.25 million from the state of Michigan, after a new law took effect there in March that gives exonerated prisoners $50,000 for each year behind bars.

“I’ve got no time to be bitter at anybody,” Ricks said after a hearing June 1 in Wayne Circuit Court. “Now, I’m just trying to get some semblance of my life back. I just want to pay my taxes and be a good citizen.”