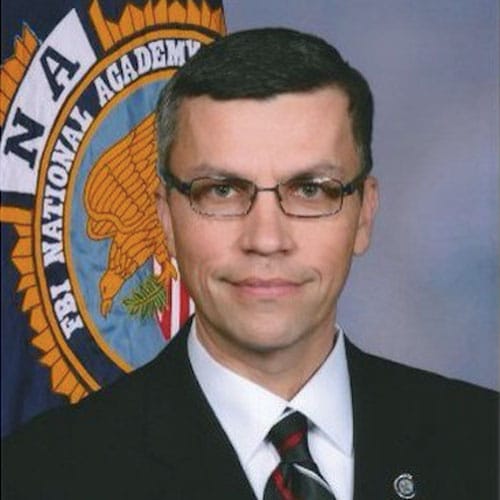 Lieutenant Patrick Weatherford, 41, of Newport, was shot and killed in the line of duty Monday night. (Photo: Arkansas State Police)

A police officer was shot and killed in the line of duty Monday night in Newport, Arkansas, leading authorities to a massive manhunt for the suspect, who remains at large as of early Tuesday morning.

Details surrounding the incident remain scarce at this point, but the Arkansas State Police identified the slain officer as Lieutenant Patrick Weatherford, 41, of Newport, a small town of fewer than 8,000 people, located about 90 miles northwest of Little Rock.

Weatherford, who has been with the Newport Police Department for 15 years, was shot near Remmel Park, then transported to an area hospital where he later died. Further details are expected to be released Tuesday.

The shooting was first reported about 7:30 p.m. and a multi-agency manhunt was underway a short time later, local media reported. It’s unclear what led to the shooting or whether Weatherford fired any shots.

According to local media, Weatherford was one of 230 officers who graduated from the FBI Academy in Quantico, Virginia, last year and was also named 2016 Jackson County Officer of the Year by Arkansas Attorney General Leslie Rutledge.

Weatherford said he realized the importance of networking and reaching out to gain resources not available to a small agency like Newport.

The investigation is being led by the Arkansas State Police Criminal Investigation Division.

According to the Officer Down Memorial Page, Weatherford is the 59th officer to die in the line of duty so far this year and the 21st to be killed by gunfire.