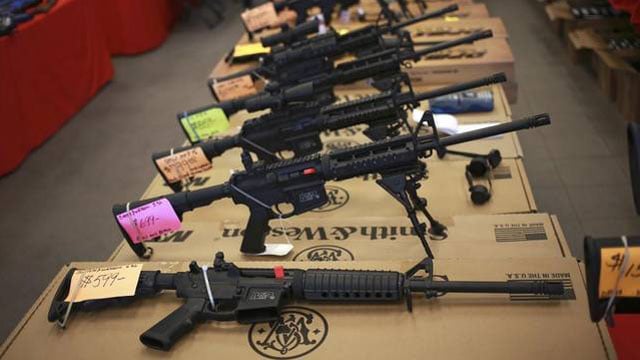 The purchase of rifles for a Kansas school district nearly two years ago has recently received a great deal of attention following an article published by local media last week.

Many parents weren’t even aware of the rifle purchases before the article was published and while some fully support the school’s decision to make the purchases, other parents are appalled at the idea of guns in the schools.

Shawnee Mission School District Director of Safety and Security John Douglass spoke with The Kansas City Star about the district’s decision to purchase eight Smith & Wesson semi-automatic rifles for the seven different schools in the district.

“I swore to myself I would never fail to do everything that I possibly could to protect kids when I took this job,” said Douglass, who also noted the recent rise in mass shootings.

Douglass, who is the former chief of the Overland Police Department, explained that while the school resource officers already carry handguns, their range is limited.

“To expect that I could stop somebody with a pistol from here to there,” Douglass said as he pointed down a hallway inside the Shawnee Mission school, failing to finish his sentence, as the point was already made.

But even so, Douglass indicated that the presence – or use – of the rifles is not something he takes lightly.

“This weapon is a very serious weapon for some very limited circumstances,” Douglass said. “You are never going to see it unless something really, really bad is happening.”

In fact, the rifles are typically kept locked up securely inside the resource officers’ patrol cars.

Still, some parents are uneasy knowing the officers are armed with semi-automatic rifles.

“I don’t fully believe one person with a bigger, badder gun is really going to make a huge difference in an active shooter situation in a school,” said parent Lisa Veglahn. “Why did they feel it was necessary over other types of weapons?”

Likewise, Melissa Patt, who has three children in the school district said, “It’s pretty offensive to me as a taxpayer to feel like you don’t have any voice and you are being excluded from decisions that could harm your child or kill them.”

Patt questioned whether the just over $5,600 spent on the rifles could have been spent elsewhere on other, more effective security measures.

However, some parents fully support the district’s decision to arm resource officers with rifles.

“While we will continue to hope and pray that these weapons are never needed and can continue to be locked in a safe, what if they are?” said parent Matt Trusty. “I would hope that in the event a real threat arose the person(s) deemed with keeping my children safe would have the tools and training to be able to do their job.”

Trevor Rine, who graduated from Shawnee Mission Northwest last year, said he feels, in the event of an active shooter situation, it is important for the officers to have the best weapons available to handle the threat.

Still, Patt, who called it “enlightening” to learn that the school resource officers are armed, does not believe that adding more weapons to an active shooter scenario is the best solution.

“As a nation, we should be asking why is it that our answer (to gun violence) is to go get more guns in the school,” Patt said.