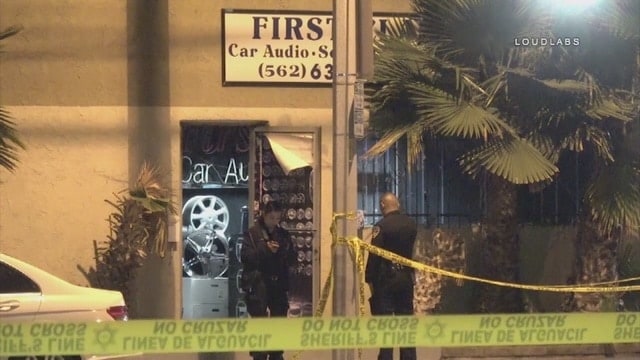 Authorities remained on the scene through the night following the attempted robbery and subsequent shooting. (Photo: Fox 11)

An attempted robbery at a Downey, California, business Monday night ended in an exchange of gunfire between the business owner and the three suspects.

The business owner was unharmed, but all three suspects were shot, two fatally.

Authorities say the incident unfolded around 8:15 p.m. at First Class Audio when the three suspects entered the business and attempted to rob the owner at gunpoint. The business owner, who local residents identified only as “George,” was also armed with a gun and an exchange of gunfire ensued.

Witnesses reported hearing about nine or 10 gunshots. One resident, who did not want to be publicly identified, told reporters that, until the police showed up, initially everyone thought the noise was just fireworks.

When officers arrived, they found two of the suspects inside the business. Both were pronounced dead at the scene. Some time later, the third suspect showed up at an area hospital suffering from multiple gunshot wounds. He remains in police custody and was last listed in stable condition.

According to reports from Fox 11, the deceased suspects are both in their 30’s. Their names have not yet been released, pending notification of next of kin.

No other suspects are believed to be at large.

One man, who did not wish to be identified but owns a nearby restaurant, said after the gunshots had erupted, he saw the third suspect run into the street attempting to get a ride. It’s unclear how he made it to the hospital.

The restaurant owner said amid the chaos, he locked all of the doors to his business. He said there were little kids in his restaurant at the time of the shooting and they were all scared and hid under the tables.

A security guard who works in the area told reporters that burglaries have become common in the area.

Another witness, who did not want to be identified, felt George’s actions were justified. He said the man has a family, works hard, and was only trying to protect his business.

The investigation is ongoing, and no charges have been filed.