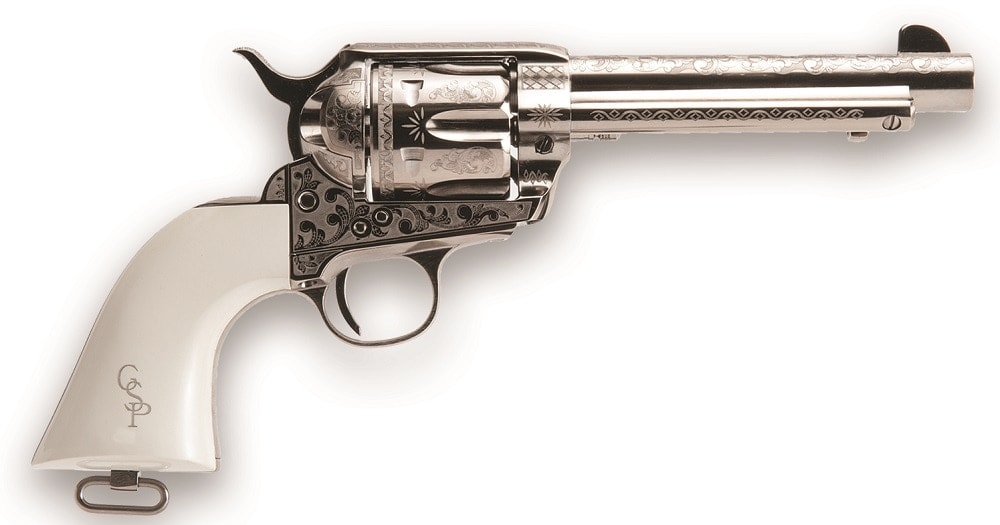 Etched in the grips are the “GSP” initials of the former horse soldier who transitioned to tanks in World War I and never looked back. (Photo: Cimarron)

The Cimarron Firearms Co. has debuted a pre-war style Frontier revolver in a tribute to the gun carried by Gen. George S. Patton.

The laser-engraved Patton series six-shooter has a nickel finish and 5.25-inch barrel but uses “poly Ivory” grips as a nod to today’s practices. Etched in the grips are the “GSP” initials of the former horse soldier who transitioned to tanks in World War I and never looked back. Befitting cavalry use, the revolver comes complete with a lanyard ring on the grip frame.

Aimed at target shooters, historic reenactors, and collectors, the gun is an ode to the famous firearm that a young Lt. Patton, then based at Fort Bliss with the 8th Cavalry Regiment, ordered from the Shelton-Payne Arms Company in El Paso for $50. in 1916. At the time, Patton’s pay was just $155 a month, so the revolver was a large investment.

That Colt 1873 in .45 LC had a 4.75-inch barrel and Patton specifically requested a highly engraved silver finish along the frame and barrel. Custom Helfricht-engraved ivory grips, with ‘GSP’ in black enamel on the right panel and a volant eagle on the left, set the gun off.

Patton eschewed the then-standard Colt M1911 for his SAA when he rode off with Gen. John “Blackjack” Pershing’s expeditionary force chasing the Mexican bandit leader Pancho Villa, using it in a shootout with Captain Julio Cárdenas, Villa’s second in command at the San Miguelito Ranchero just weeks after he picked it up from Shelton-Payne.

Patton carried the gun off and on, along with others, during his continued service and famously remarked when asked by a correspondent in World War II if the Colt was pearl-handled with, “Only a pimp in a New Orleans whorehouse or a tin-horn gambler would carry a pearl-handled pistol.”

Here are some shots of the original GSP-marked Colt that we took a couple years back, because Patton. 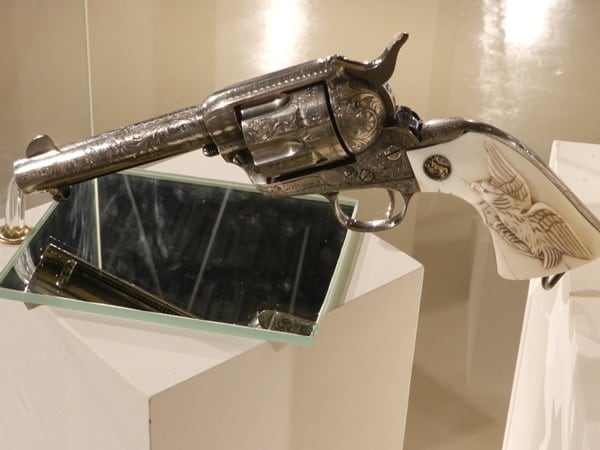 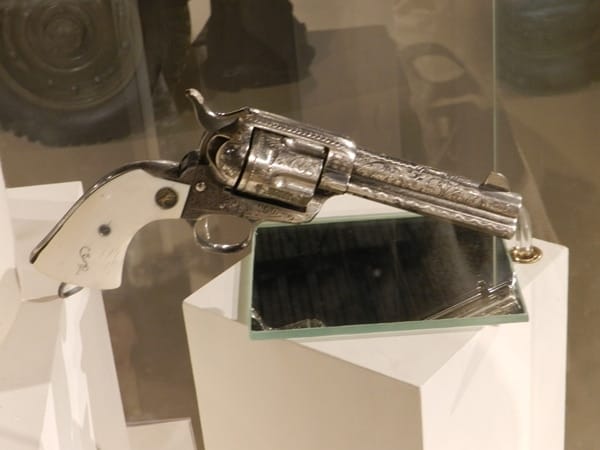