Georgia inmates on the run after killing prison guards during transport 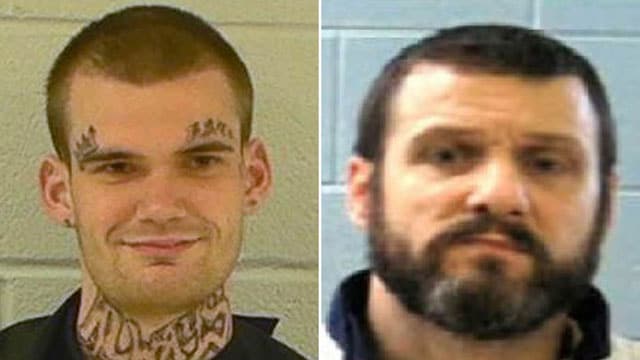 Authorities in Georgia and across the country are searching for two escaped inmates who allegedly murdered two corrections officers in Putnam County during a transport Tuesday morning.

Sills said Donnie Russell Rowe, 43, and Ricky Dubose, 24, were being transported in a prison bus when they somehow broke free and made their way into the front area of the bus. The pair reportedly overpowered the corrections officers, took their service weapons, and fatally shot them.

According to the Atlanta Journal-Constitution, the shooting was captured on video, but Sills would not provide any further details.

The deceased corrections officers were identified as Christopher Monica, 42, and Curtis Billue, 58. Monica had been with the department for eight years and Billue was a 10-year veteran. Both left families behind.

Thirty-one other inmates were on the bus at the time of the incident, but Greg Dozier with the Georgia Department of Corrections said they stayed on the bus and have cooperated throughout the investigation. Sills confirmed that it was a routine transport and not a work detail.

Armed with the officers’ .40-caliber Glocks, Rowe and Dubose stopped the first passerby and stole that individual’s car, which is described as a 2004 grass-green Honda Civic with the license plate RBJ-6601. According to the Oconee County Sheriff’s Office, Tuesday afternoon, Rowe and Dubose broke into a home there and ransacked it, stealing clothes and leaving their prison garb behind. The stolen Honda was not found.

According to prison records, Rowe was serving life without the possibility of parole for a 2001 armed robbery. Dubose, a known gang member, has a lengthy criminal history that includes armed robbery and aggravated assault, as well as a host of financial crimes. He was serving a 20-year sentence.

Sills said his biggest concern is that the inmates are going to kill somebody else. He said they should be considered armed and extremely dangerous. Residents are warned not to approach them, but if they are seen, to call 911 immediately. The escapees could be headed anywhere, Sills said.

A collective reward of $75,000 is being offered for their capture, but that amount is expected to increase as the search continues.

“I saw two brutally murdered corrections officers. I have their blood on my shoes,” Sills said, adamantly noting that Rowe and Dubose need to surrender before they are found.